Adventures On The Road 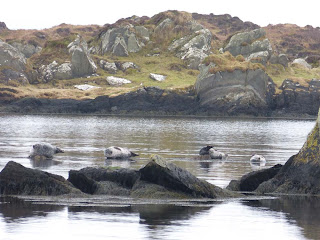 February 2013Christmas and New Year passed in a blurr and a rather traumatic reaction, which played havoc with our health.
Andrew was prevented from travelling North with his caravan to spend two months in isolation at Kildalton by the injectors in his car going..and then the cold winter took hold and it seemed more sensible to wait for Nick to finish work and go together! Nick had to wait to load his leaving present from Dorset Tubes, a woodburning stove onto a pallet with most of his tools and this held them up further.
They finally left a day after Bob (our great friend, ex neighbour and lorry driver) and myself, who were travelling up for ten days towing Nick's Shetland skiff.


The Bumpy Road North!Bob and I left at 9.30pm onThursday 14th February, to catch the morning ferry at Kennacraig 12 hours later.
At the Tesco roundabout in Blandford we heard a metalic "Ting!" and didn't think much of it as the boat seemed fine and was travelling very well behind Bob's Freelander. We settled into the journey with empty roads and cruised through Salisbury, passed Old Sarum, towards Amesbury just before midnight.
Suddenly there was a loud "Bang!" from the Canadian canoe on the roof, lights flashed and Bob stopped! We got out to investigate. The road was very busy and very dark. The boat had slipped sideways, half off the trailer, but luckily not onto the road. Bob looked at the boat and then looked at me.."I don't think we're going to Scotland Mary-Ann"!
We rang Nick (who was madly packing to leave tomorrow), for advice and decided to try sorting it out ourselves, which involved lifting the very heavy boat back onto the three rubber rollers it was resting on and securing it with rope and fenders.
Unusual Hindrances, Help and Encounters!We positioned ourselves to lift and in the blink of an eye the boat was in place. We looked at each other and said, "Well that was easy"!
I shined the torch on Bob as the cars raced past, stopping to overtake, lights shining, dark, then more lights, then dark. We found every rope we could lay our hands on and while I kept the torch shining on Bob, he tied the the boat back in place at great risk to life and limb!
Out of the dark a voice said "Are you alright? this is a very dangerous road" and a man appeared from the other side of the dark road.
"Where are you going?" he asked from beside me.
"Scotland, the Isle of Islay...we hope" I answered
"That's funny" he said " I bought my boat from a famous writer, who lived on Islay, but I can't remember his name. If you go a bit further down the road there is a bus stop and layby, where you will be safer, this road is so dangerous"...and with that he crossed back and disappeared.
Sure enough there was a layby and we finished securing the boat and trailer in safety.
To be doubly sure we pulled into a superstore in Amesbury as the car park was well lit, but as we started to retie some of the ropes we were plunged into darkness and just had to laugh! A garage proved much better and soon we were on our way again. 12 hours later we arrived at Kennacraig, with a sigh of relief! 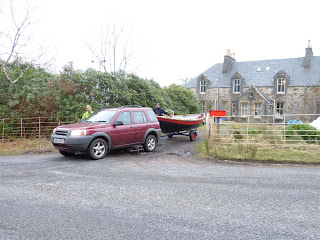 Whatever the weather I love to watch Islay growing bigger as the ferry gets under way and it was a beautiful morning, flat calm and sunny. In fact we left the rain at Manchester and found it in the same place on the way back! Bob fell asleep in the bar, so I left him, after all he had driven the whole nerve wracking way.

Meanwhile back in Dorset the following day about 7pm, Nick and Andrew set off towing Andrew's caravan, but only got as far as Sturminster Marshall when a wheel fell off the caravan! It skidded along the road and the wheel ended up in a wood.Something was holding us up! Many scratches and arranging of wheel nuts later they aborted and went home to start again the following day.Now you may say "How stupid!", but you have to understand that Andrew had been waiting around for weeks to get going and suddenly it all happened at once. He started tightening the wheel nuts and got called away! How many of us has that happened to? Certainly me! 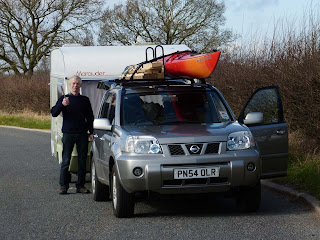 Bob and I went bird watching in the bitter wind and finally 2 days later Andrew and Nick arrived on the Port Askaig ferry, one adventure over, another about to begin. 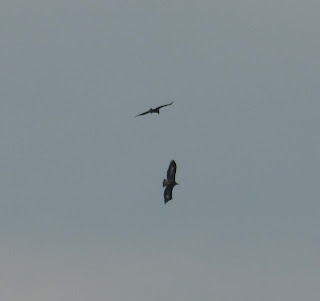