The Scaffolding's Down! Amongst Other Things.. 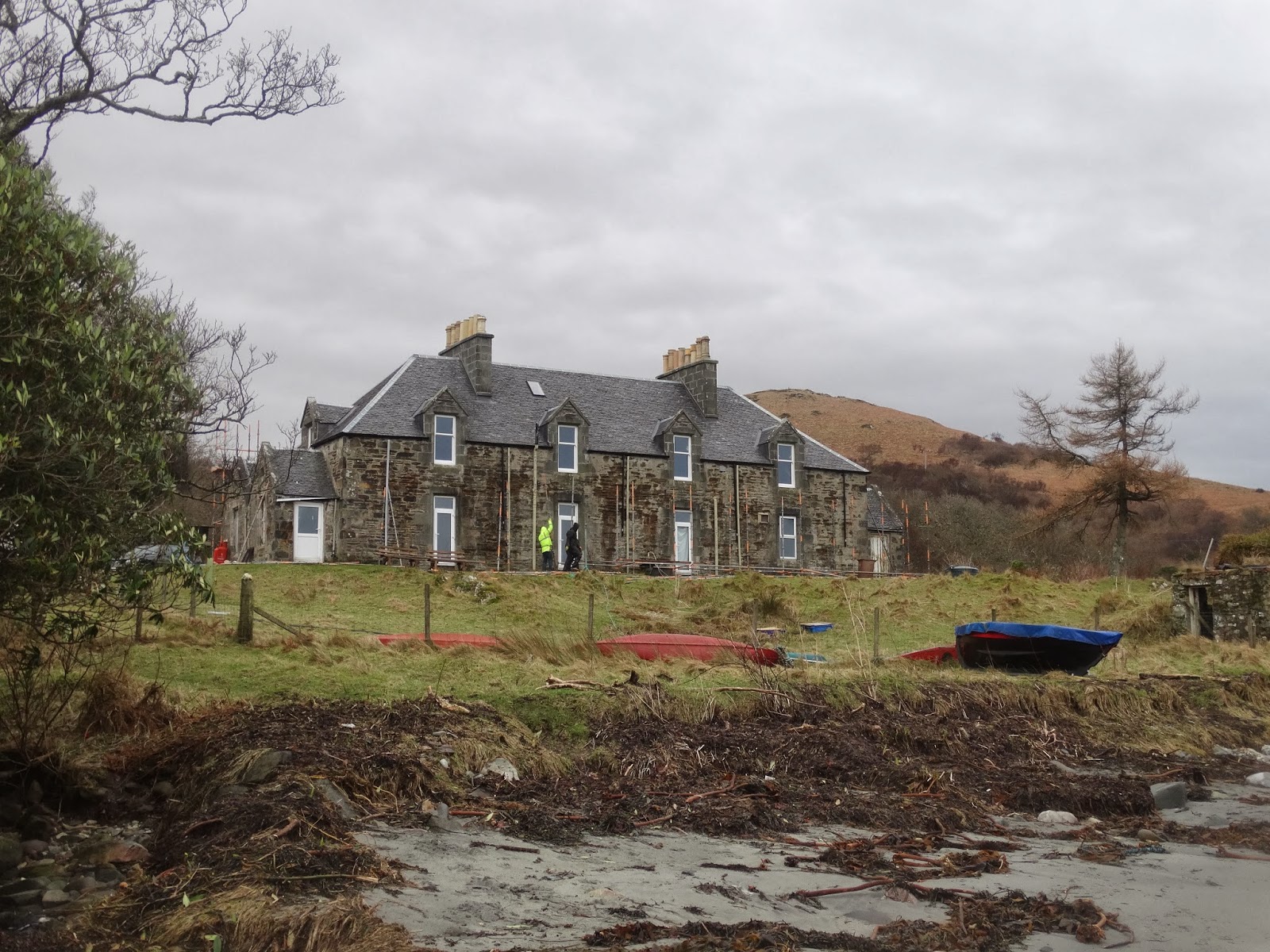 I'm not really sure how to caption this picture... We've been working towards the time when we were ready for the scaffolding to come down since mid May 2013, so for it to finally be gone really does feel like a giant leap in the right direction. There has been a few occasions like this already, the end of re doing the roof, is probably the one that jumps to mind first. Although the scaffolding itself wasn't a task for us-Donald Baker from B & L Contracts rented it to us, put it up and took it down- but the fact that we have come to the stage where it is possible to lose it means that jobs such as the chimney stacks, the roof, the upstairs windows, pointing below the eaves, guttering and rebuilding the dormers are finished. Last week we had a final rush to finish everything necessary. Mary-Ann and I went around and put silicon over each of the nuts and screws on all 60 something gutter brackets, Katie, Dan, Mary-Ann, Nick and I painted all 10 dormers twice over with SBR, which is water resistant and should, in theory, stop the dormers leaking, I dried the cement holding the triangular top stones of the dormers in place with a heat gun then filled each join with transparent mastik, again for water proofing purposes, and Nick painted both chimney stacks with SBR from a precariously balanced ladder, I'm sure Mary-Ann has pictures to follow that point! Meanwhile, Katie, Dan, Mary-Ann and I have carried on with the endless task of pointing the upstairs rooms. I have mostly been doing 3 of the 4  attic walls-Katie and Dan did the other!- Mary-Ann has also helped in between doing the other 20 jobs she does everyday in the 'office'. (aka, the kitchen, dining room, computer room and sitting room) 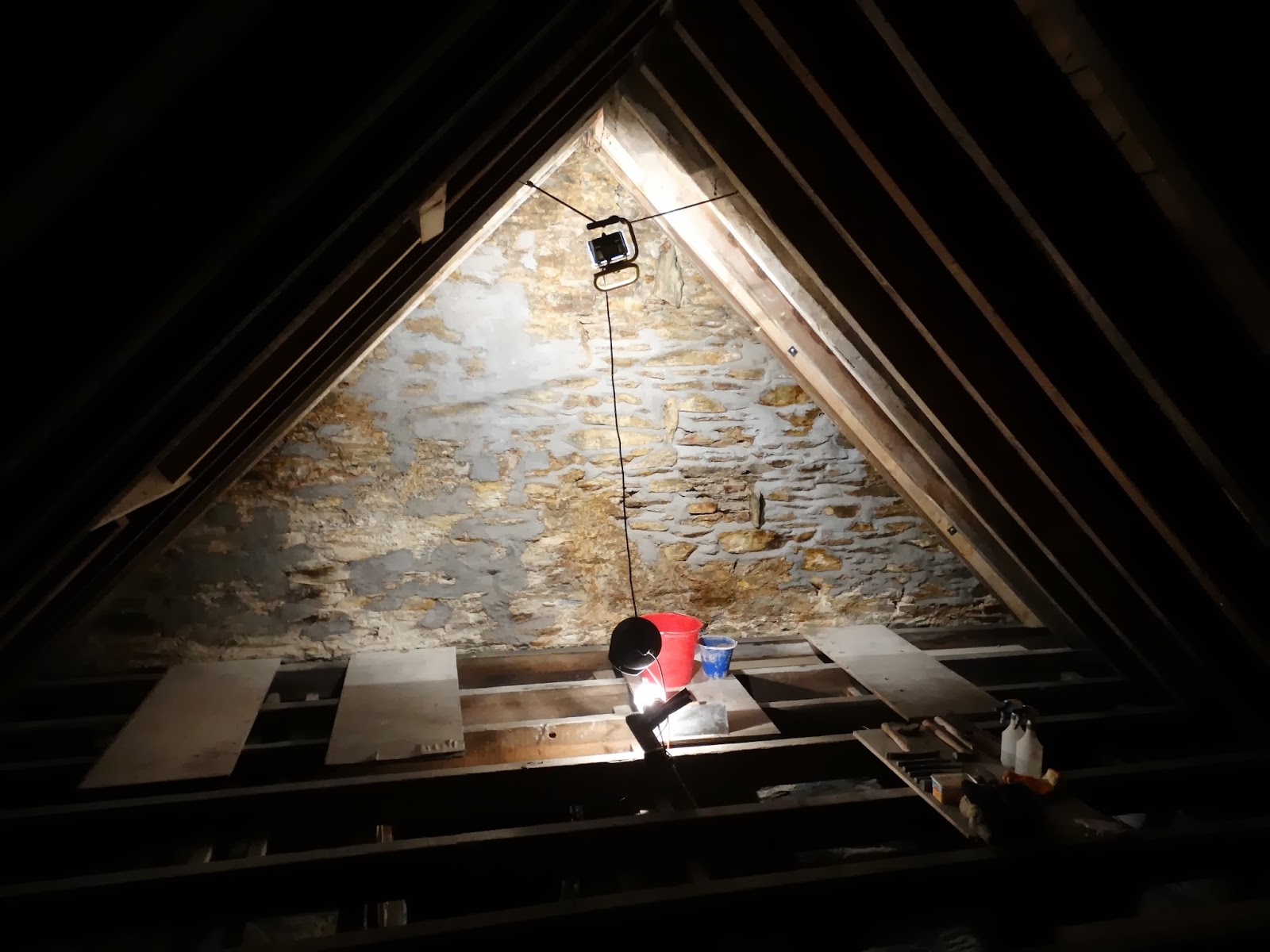 These walls are particularly bad as they have been wet for such a long time. The old mortar just crumbles out, or in some cases, sploshes out where it is so wet. This has meant that almost every single crack has to be chipped out and re filled... 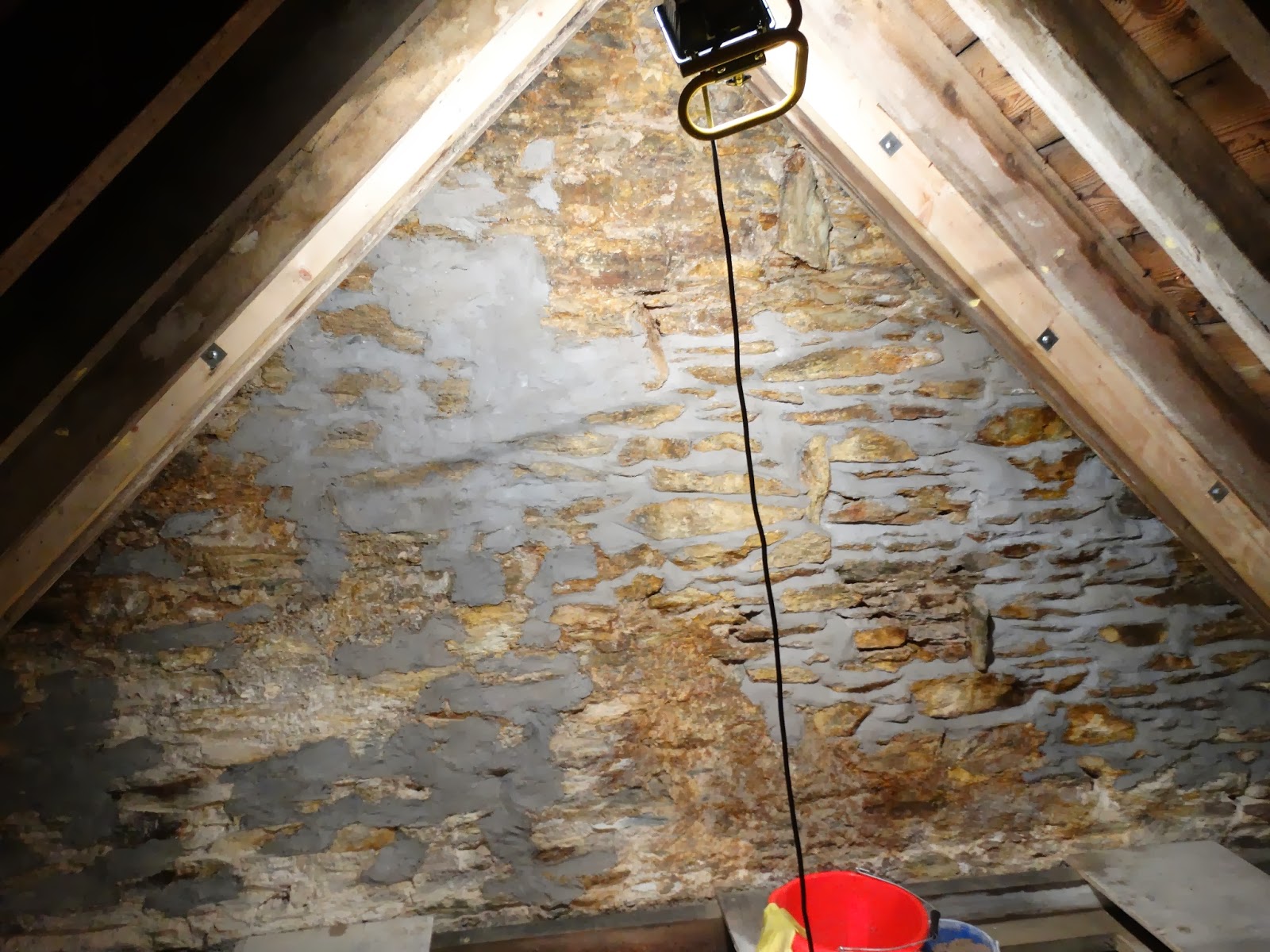 And yes, I am taking far too much time making it look good when its going to have plaster board over the top anyway. (Mine is the right hand side, Mary-Ann's the left.) 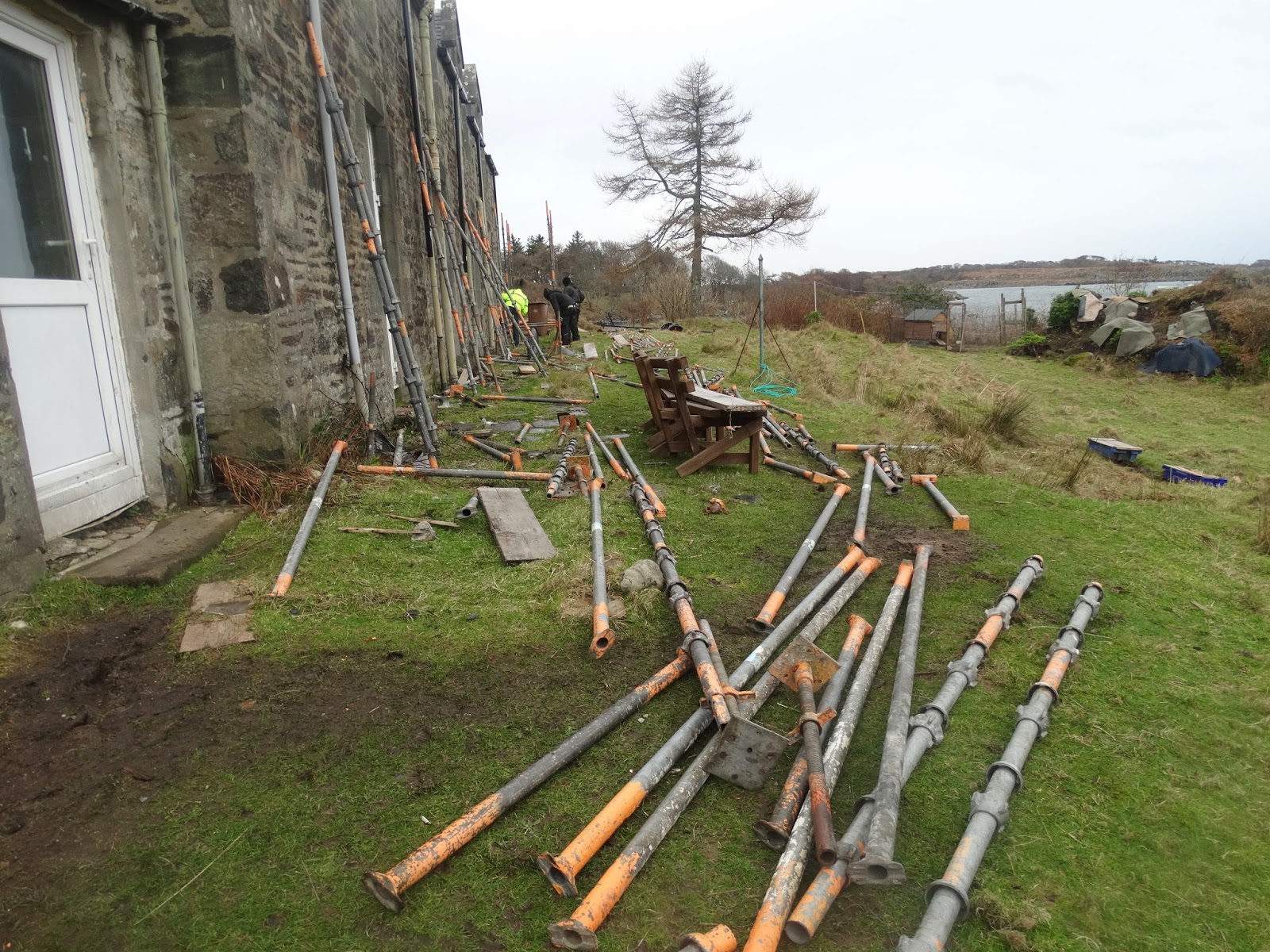 On Monday it was so windy that Nick and I removed all the scaffolding planks from the seaward side of the house and took them to the road side-in gale force winds-but we were worried that one would go through one of the new windows! As it was they broke one gutter bracket, but it is fixable and much better than it could have been considering that 4 of the planks actually blew off and landed on the ground below. (The planks were roughly 9 1/2'' by 2'' and about 10ft long, to put that into perspective-we didn't ever measure them and they've gone now, so we had to approximate!)


A few more of the scaffolding being taken down. 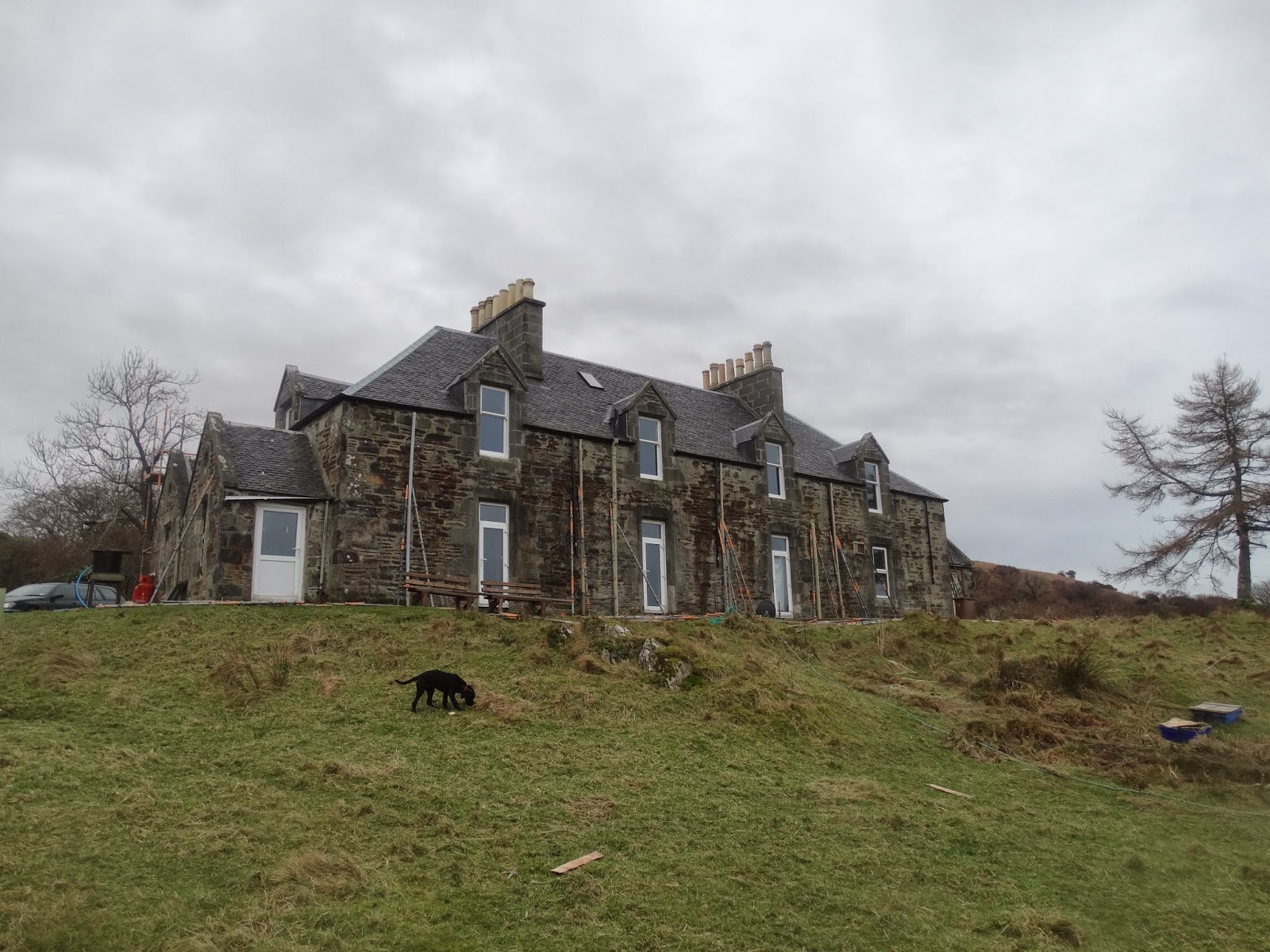 There's so much more room around the house now! 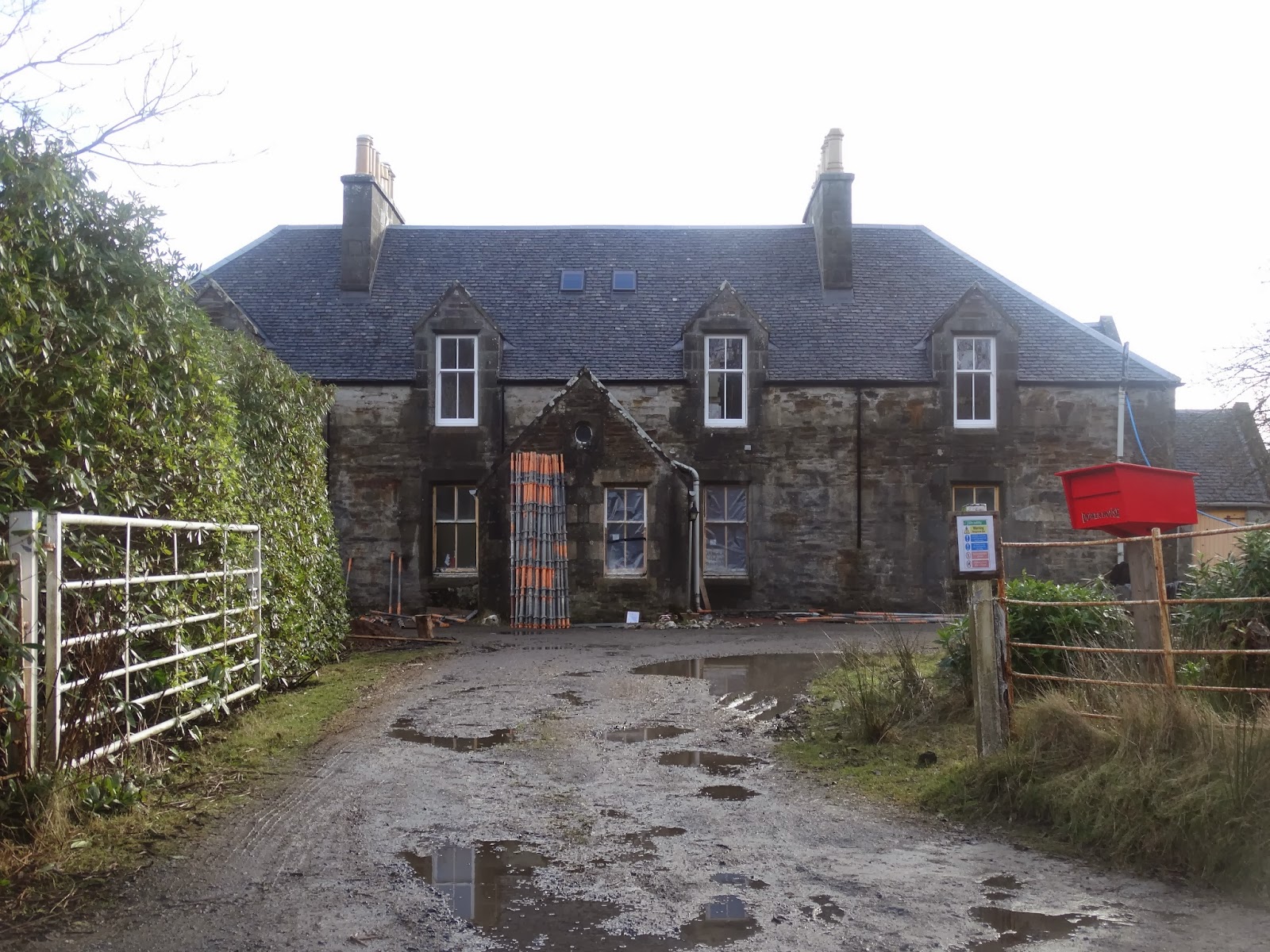 This is a good one for admiring the new roof... Or maybe thats just me, because I know how long it took to get it looking like that. 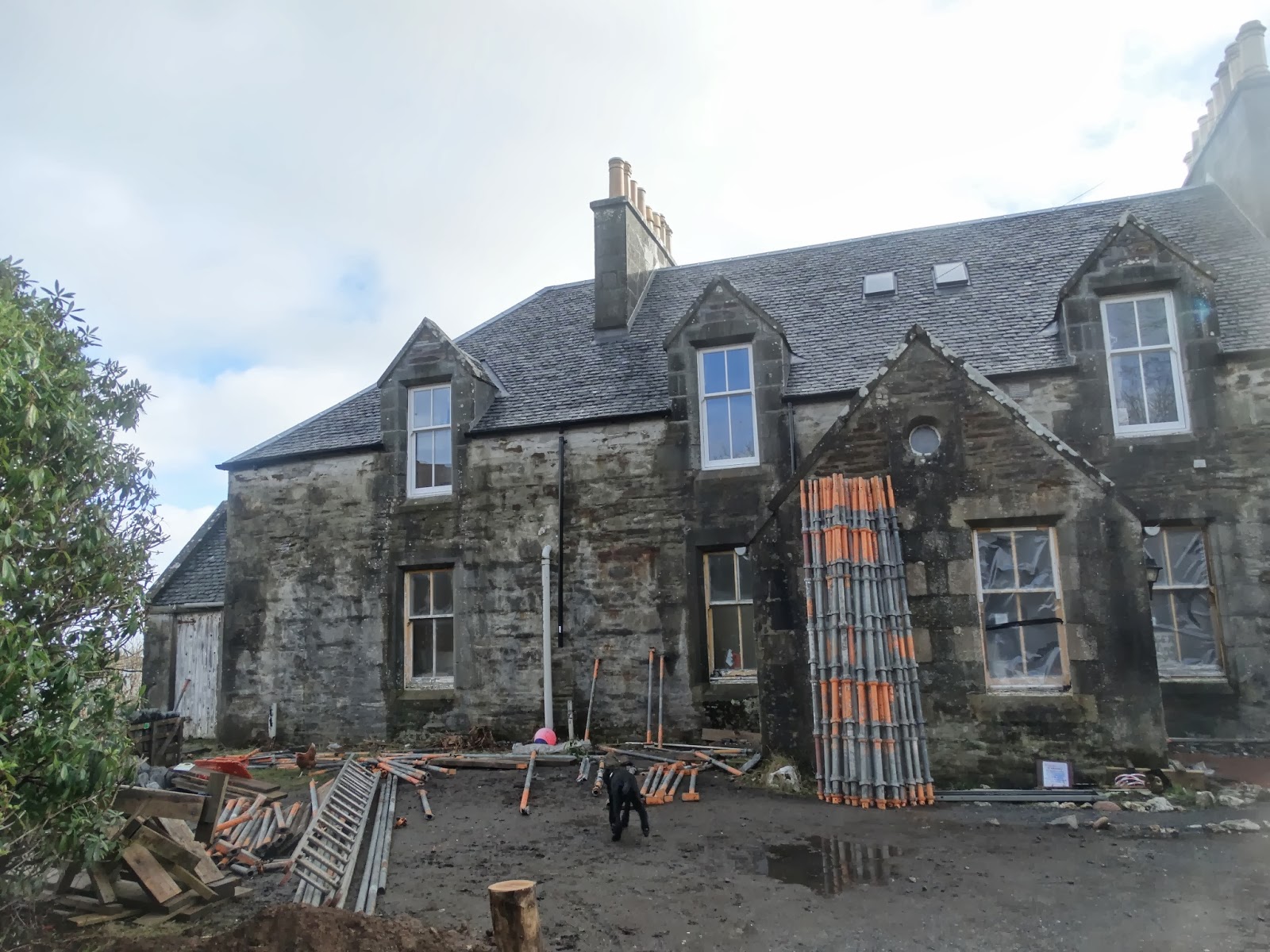 It took 4 or 5 trips for Donald to take away all the scaffolding boards and poles. 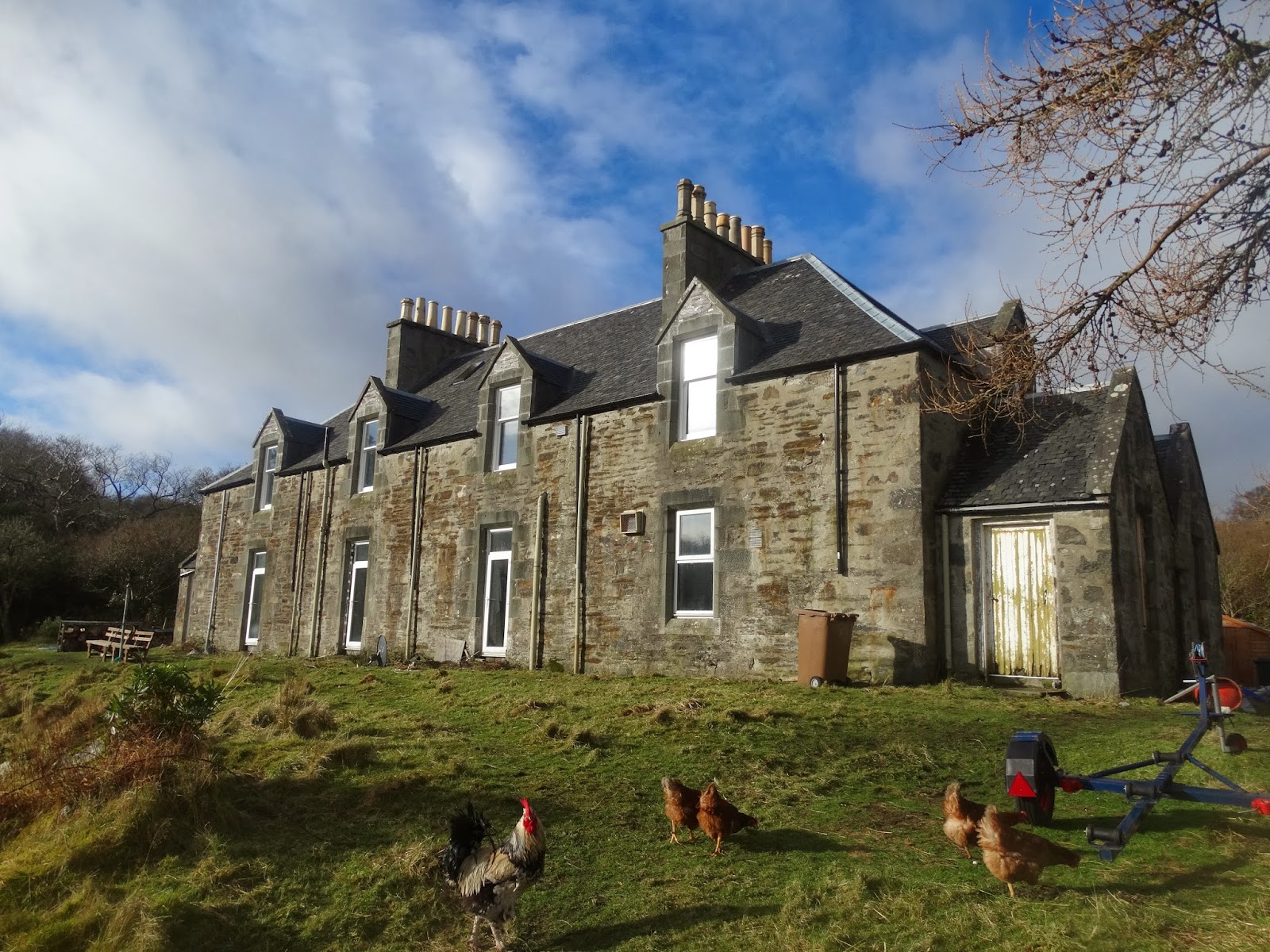 Looking good in the sun. 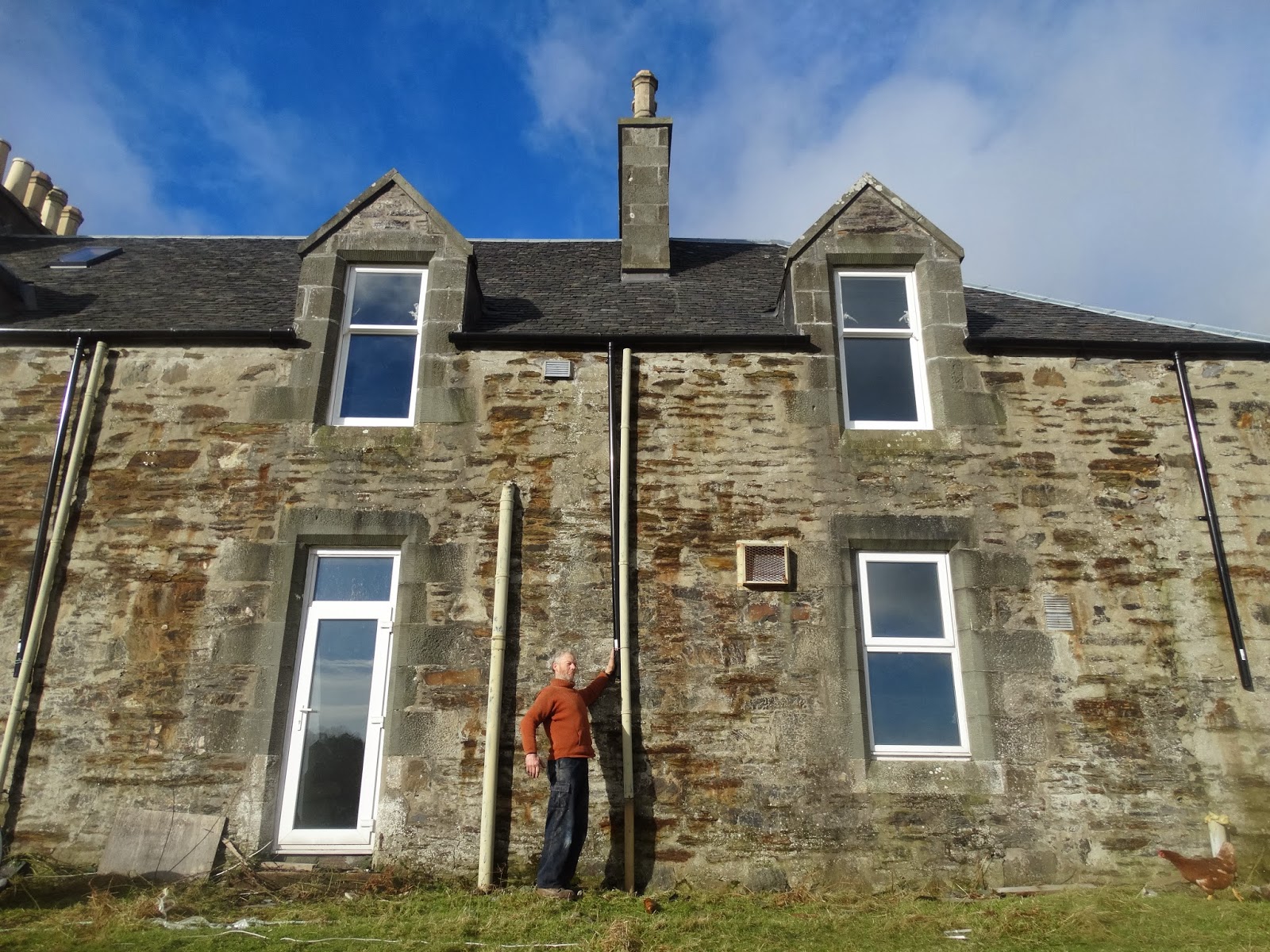 Nick posing with his new downpipe. (The black one not the white in front of it!) 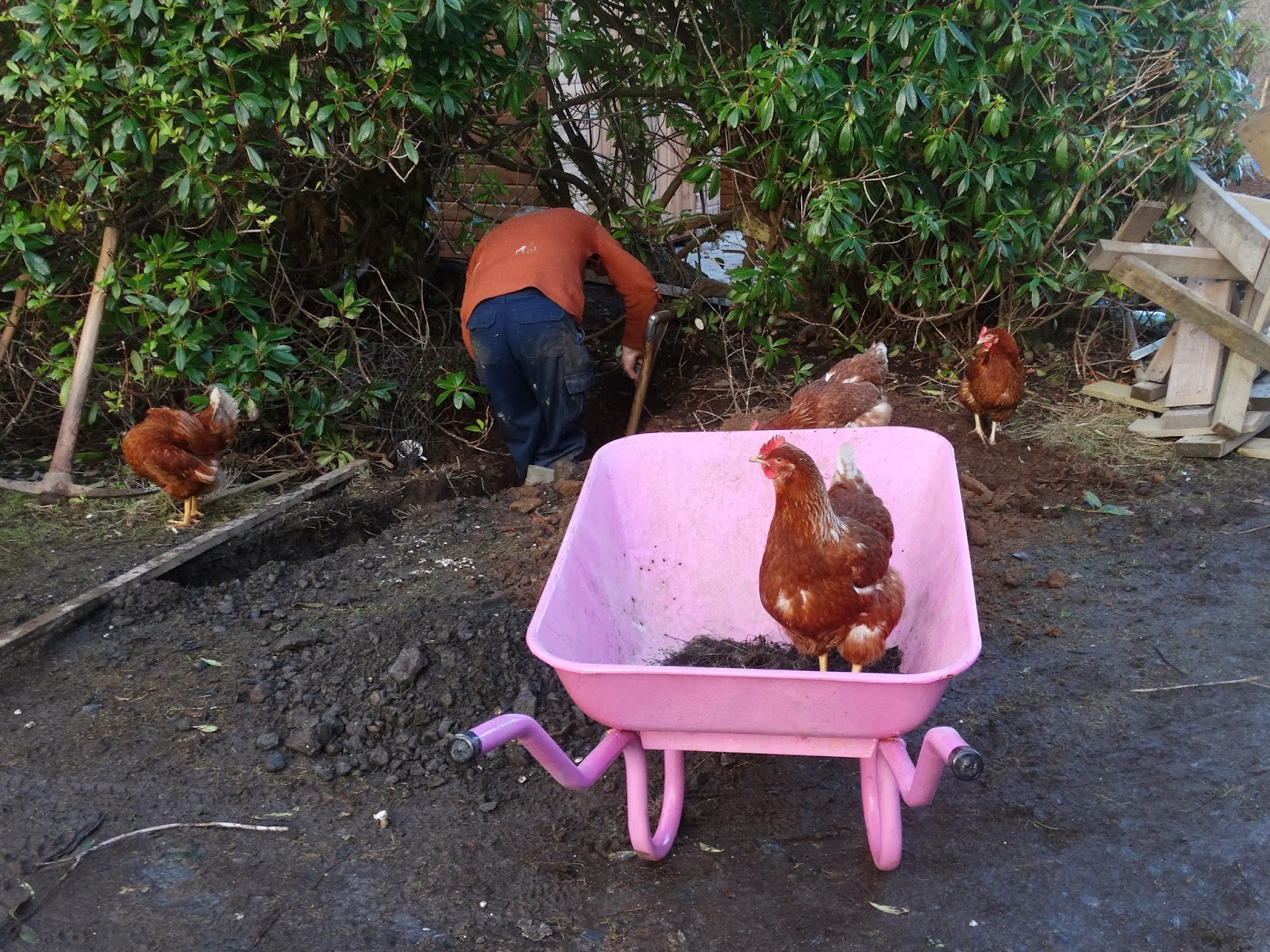 Nick spent all weekend and the beginning of the week digging a trench for drainage as the drive is basically just one big puddle at the moment, which is a bit of a problem when I am trying to walk to my shed in the dark. (Having a trench and having a puddle, actually...) The chickens are a complete nightmare as they want to investigate every shovel full of earth for worms, so are liable to get their heads chopped off! This is Bronwyn the chicken sitting in the wheel barrow. (Don't ask about the name, it's a long and boring story!) 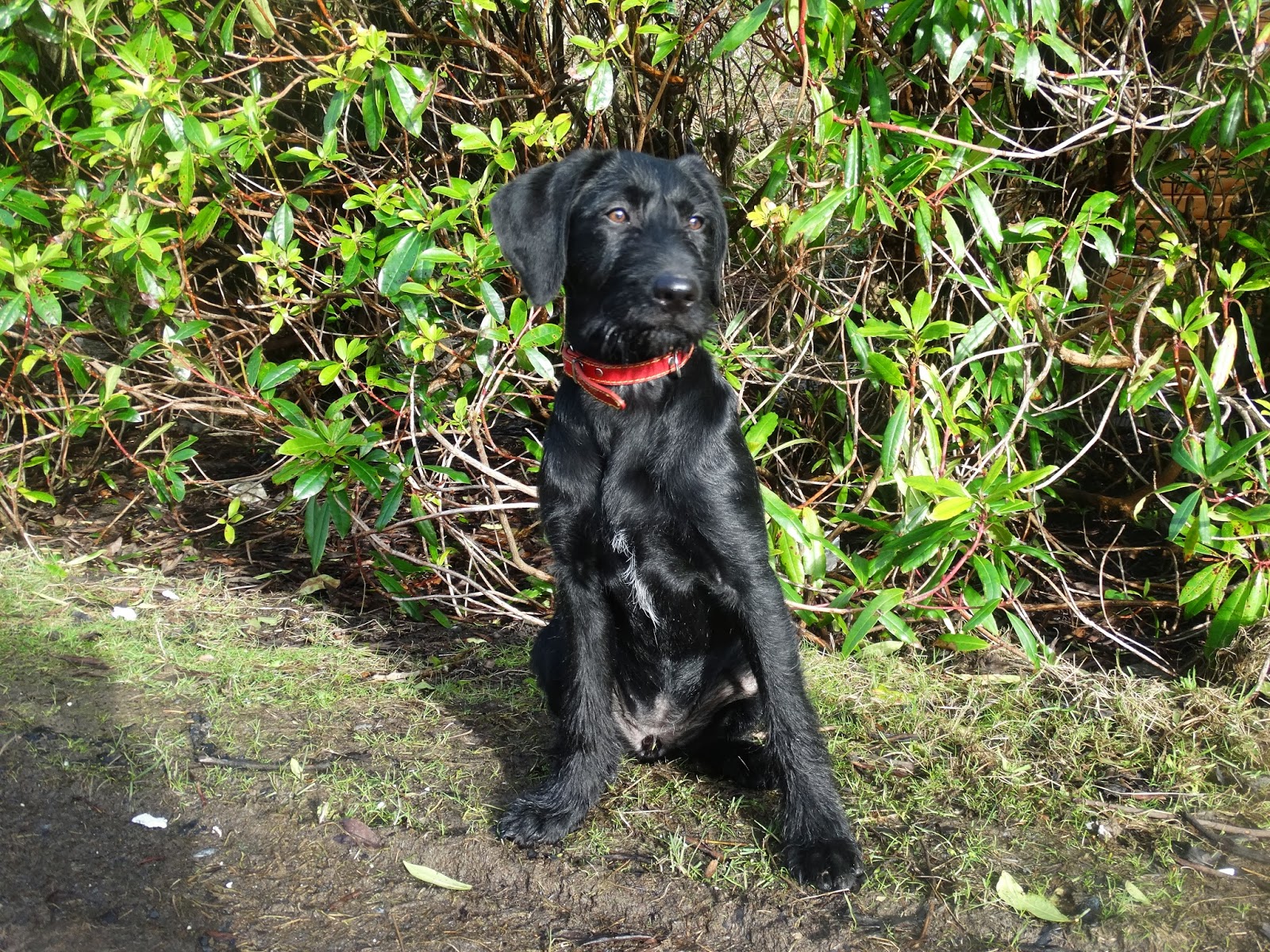 Cassie has aspirations of being a model. 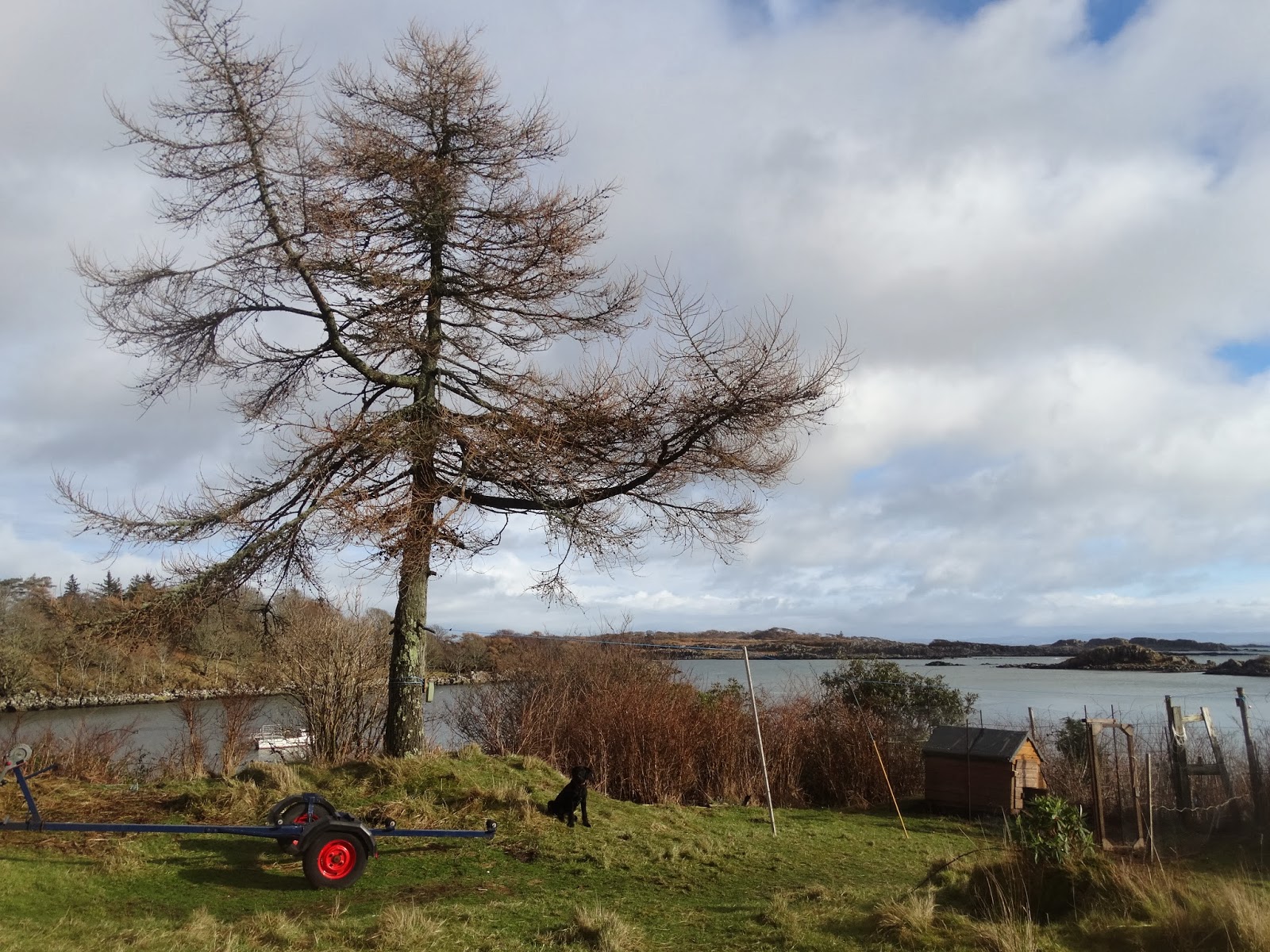 She has also developed the exceptionally annoying habit of running away and sitting down on the other side of the garden and staring at you. Possibly laughing. Actually, she has developed quite a lot of bad habits. Perhaps going through a rebellious teenage phase! We caught her on the beach yesterday eating a haddock that had washed up that was about twice the length of her body... ew. She is still a lovely dog though, and is learning very fast! 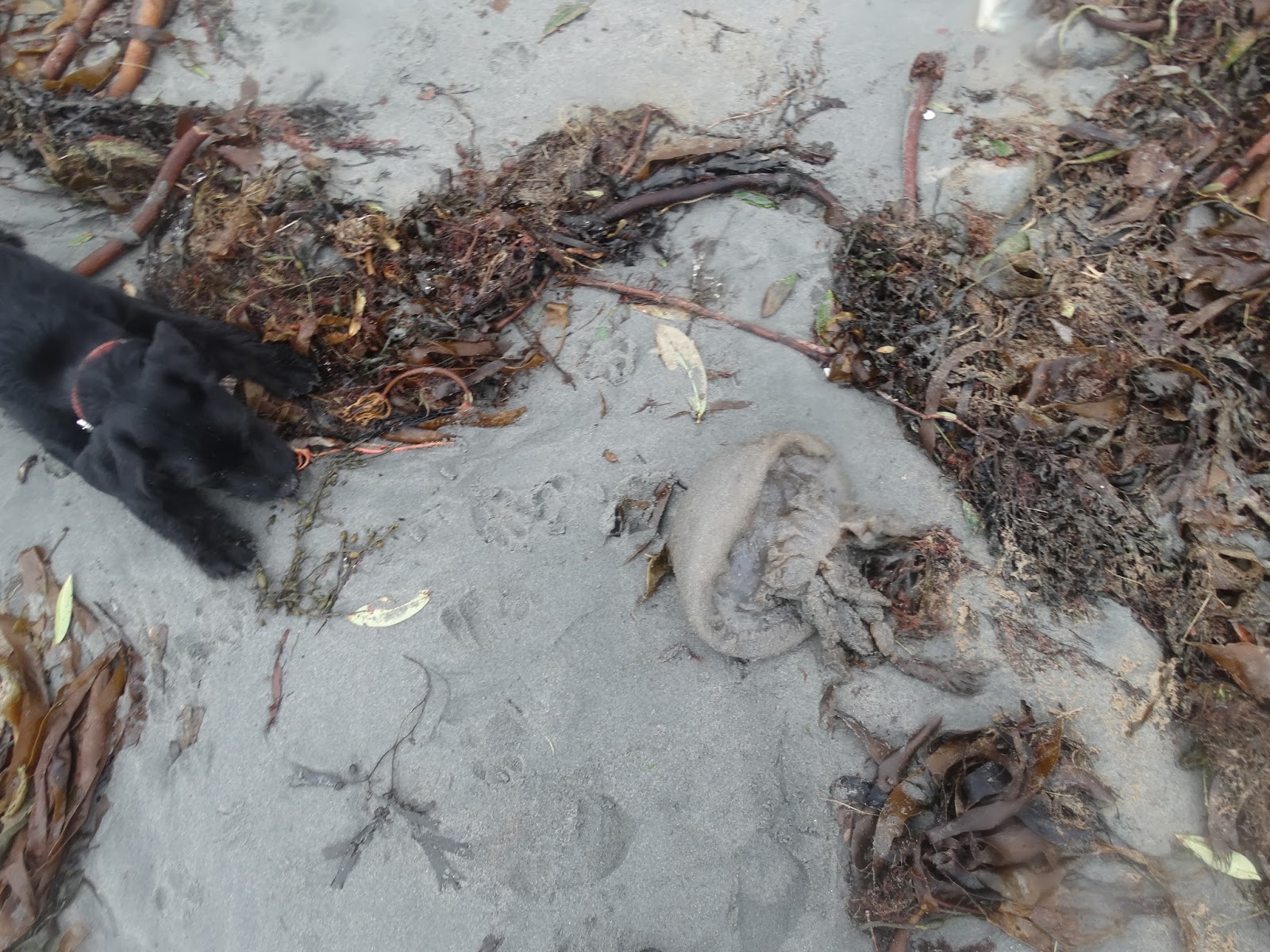 This giant jellyfish also washed up. Cassie thought it might be quite good fun to play with... There have been a lot of unidentified items washed up in the storms, including a few pieces of cast iron which Nick thinks may be pasts of an old cooking stove. 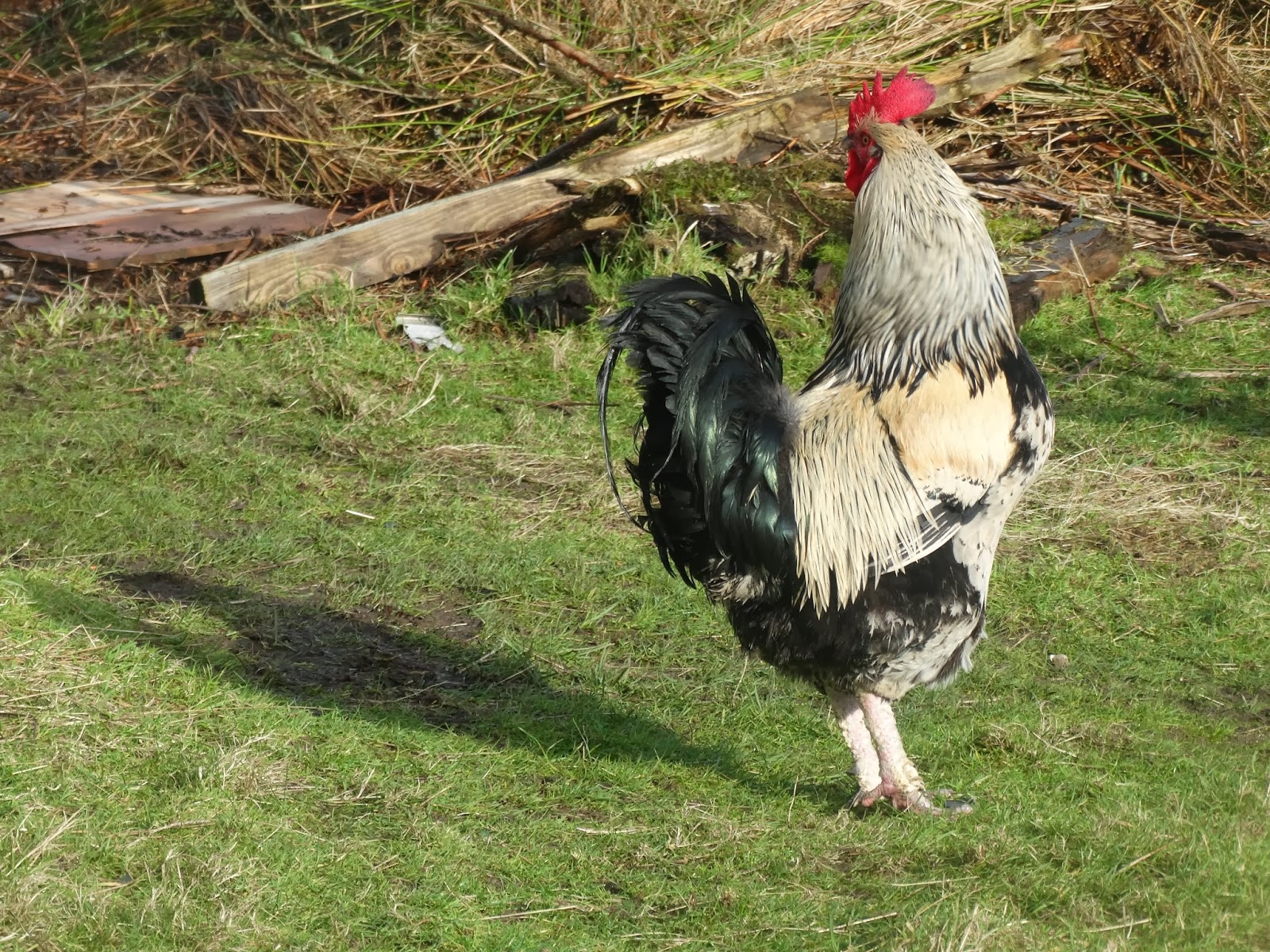 The weather has been so bad that Bertie seemed quite shocked to see his shadow today. It has been a really sunny day, I even put my shorts on for a few hours over lunch! 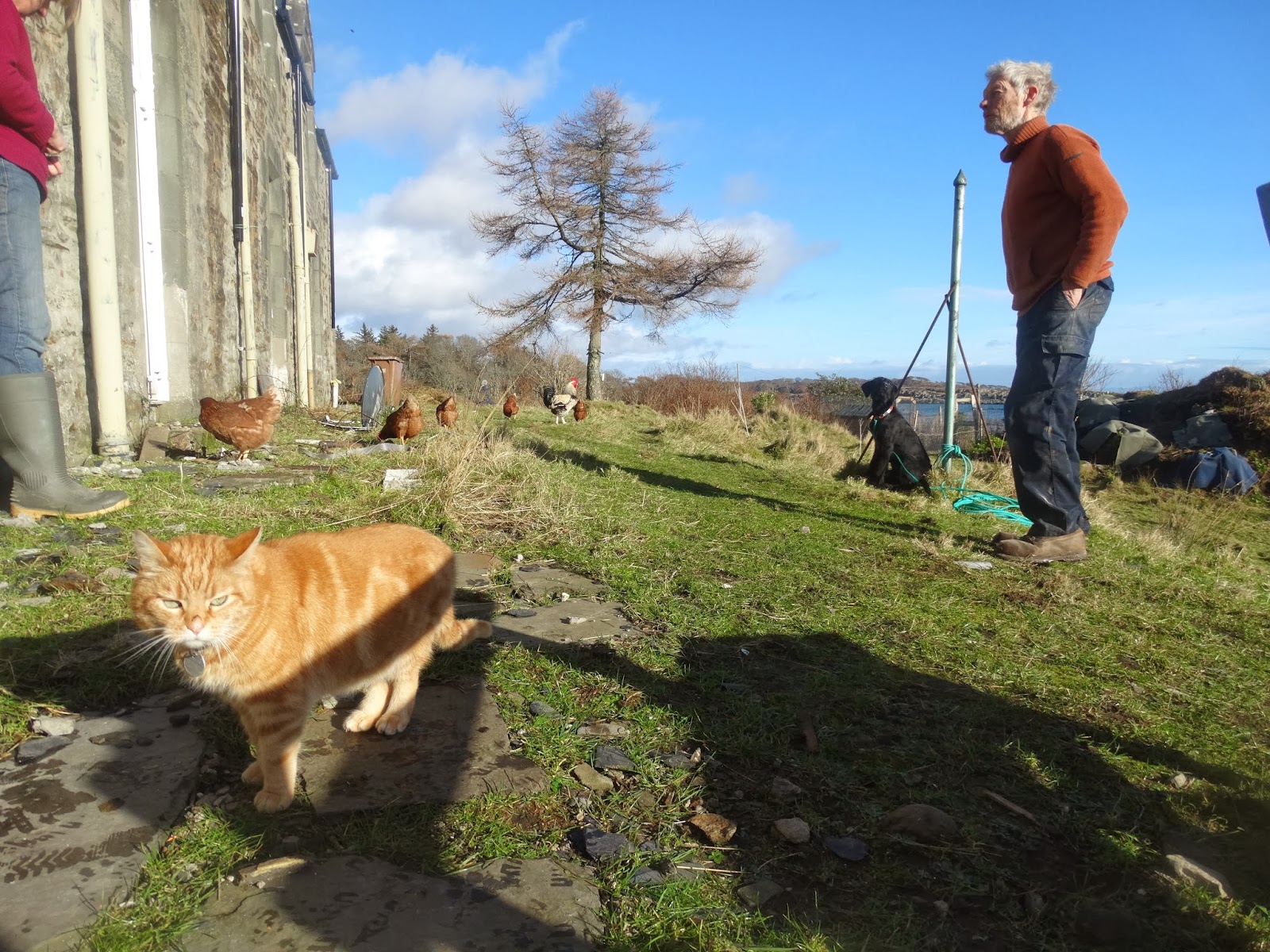 When I was a child, I used to compare the number of animals I had to my friends, it was like a sort of competition. One I never won, despite the 5 giunea pigs, 2 cats, dog and numerous fish. I think now though, I might be in with a chance. Isla wouldn't pose for the picture, but here are the rest of them! 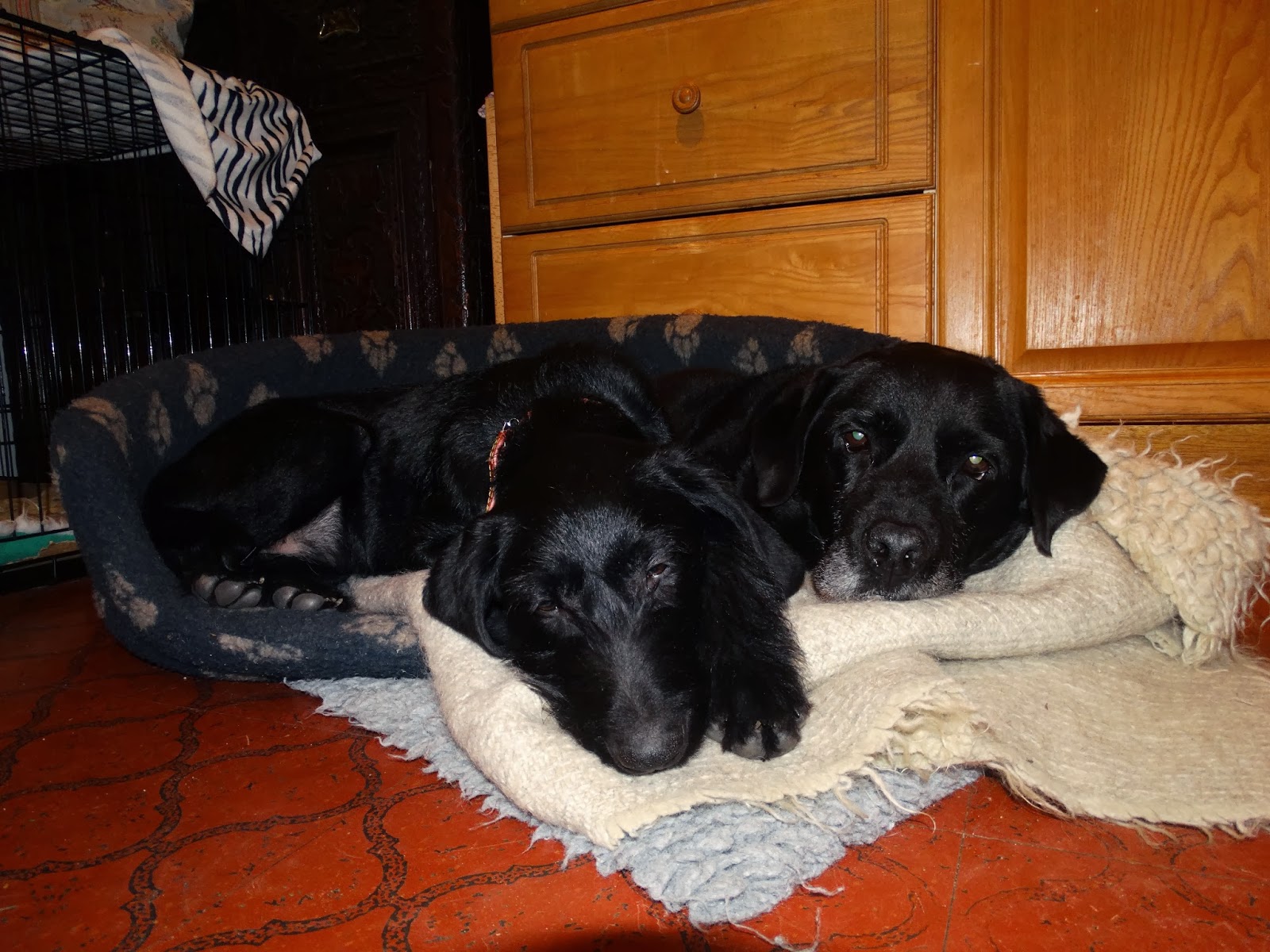 Isla will just about tolerate Cassie these days. For a few minutes anyway. She looks a bit resigned here.. 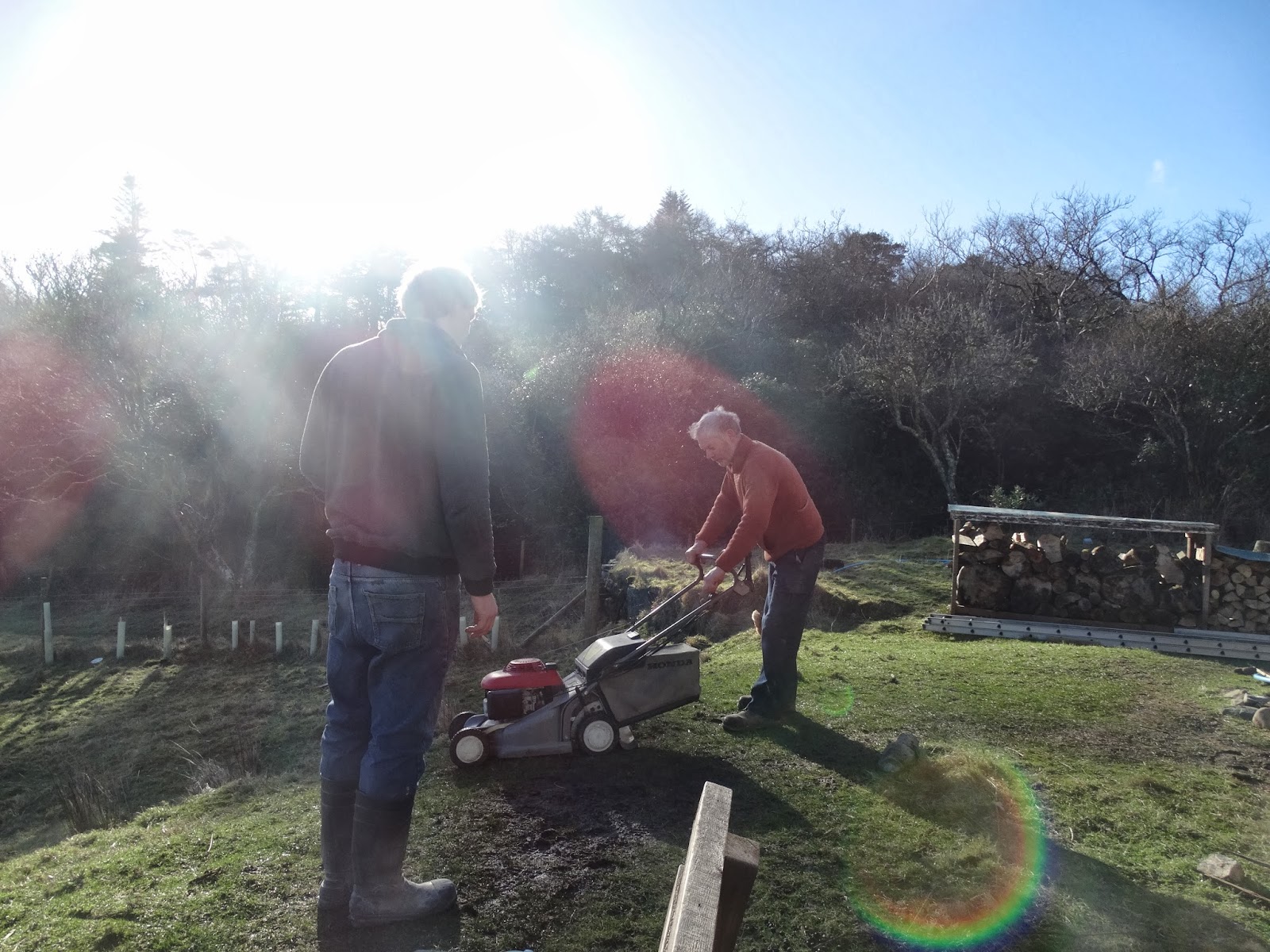 Nick and Dan starting up the so far unused petrol lawn mower this lunch time. It doesn't seem to cut grass just yet, but it does run, so that's something! 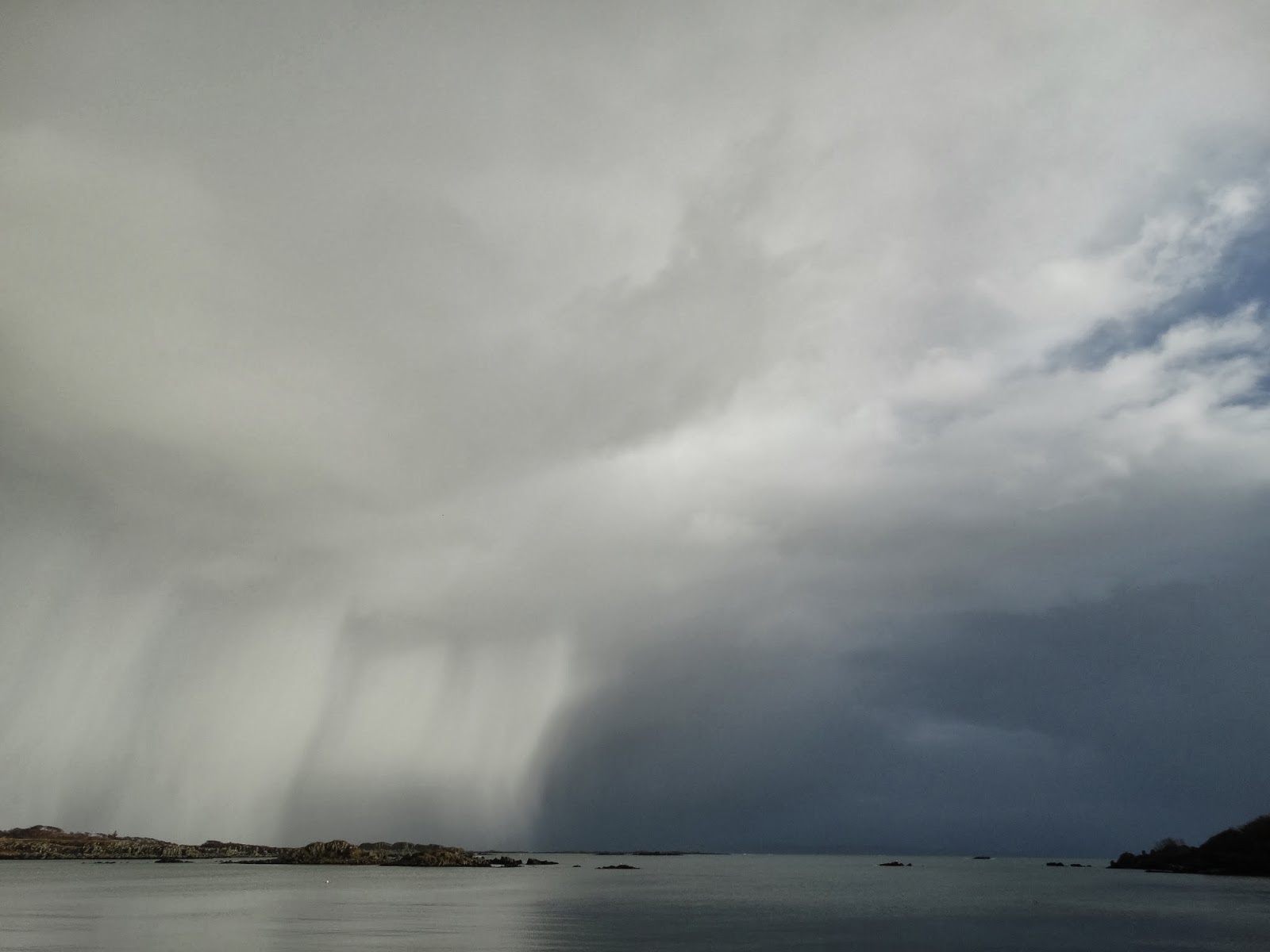 With the bad weather has come some pretty impressive skies. 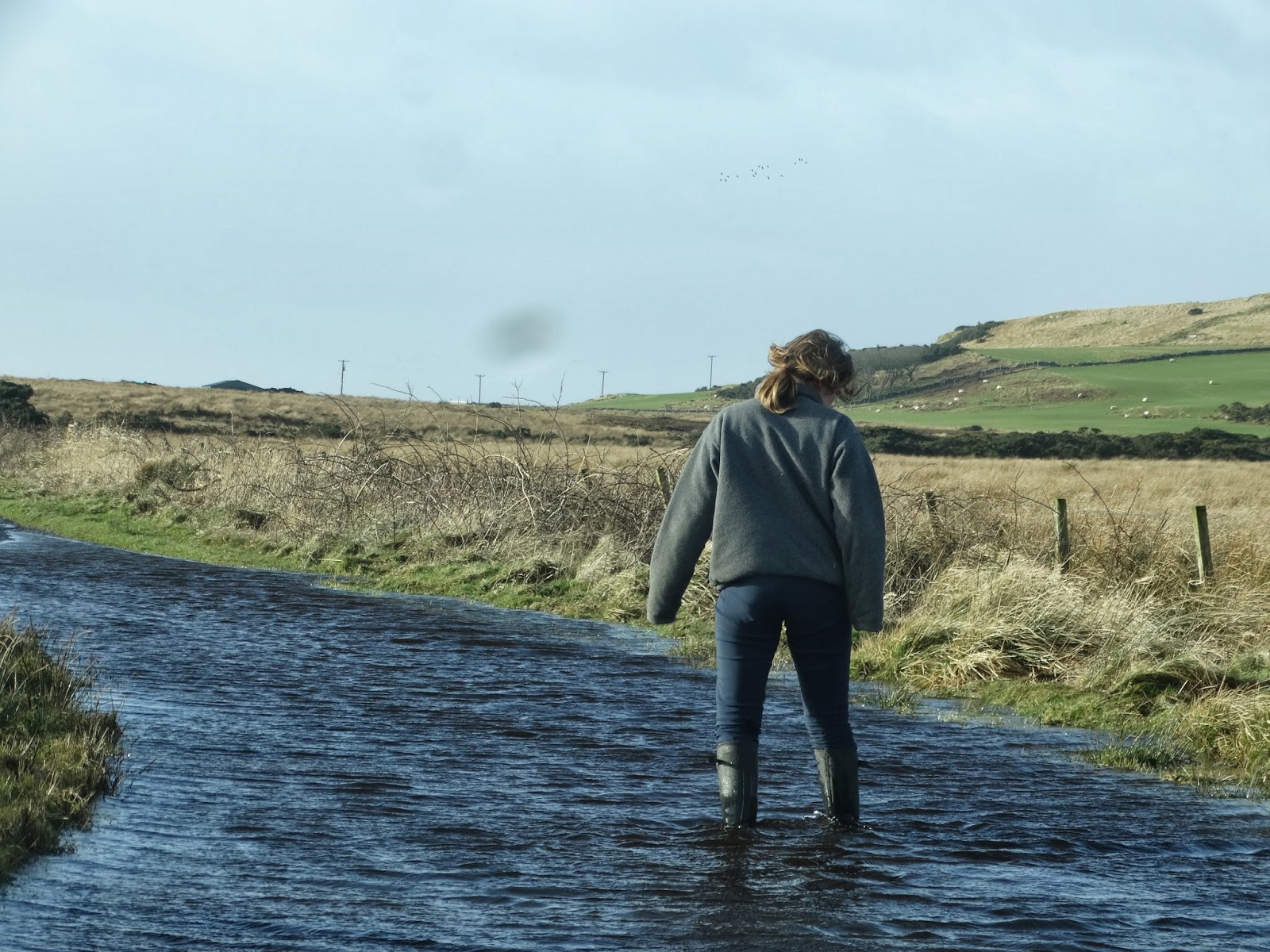 I know Mary-Ann has already posted about our trip to Sailgo bay in the storms, but I just found my photos, and couldn't resist a few.

On our way, we encountered a giant flood that stretched on for about 100m down the road. Naturally, I got thrown out of the car to walk infront and make sure it wasn't too deep. It was probably a good job in hind sight as the sides were often above wellie depth, so I has to shoo Mary-Ann onto the other side quite frequently. On the other side we met another car, the man rolled down his window and said that they were 'cruel' for making me walk. I quite agree. 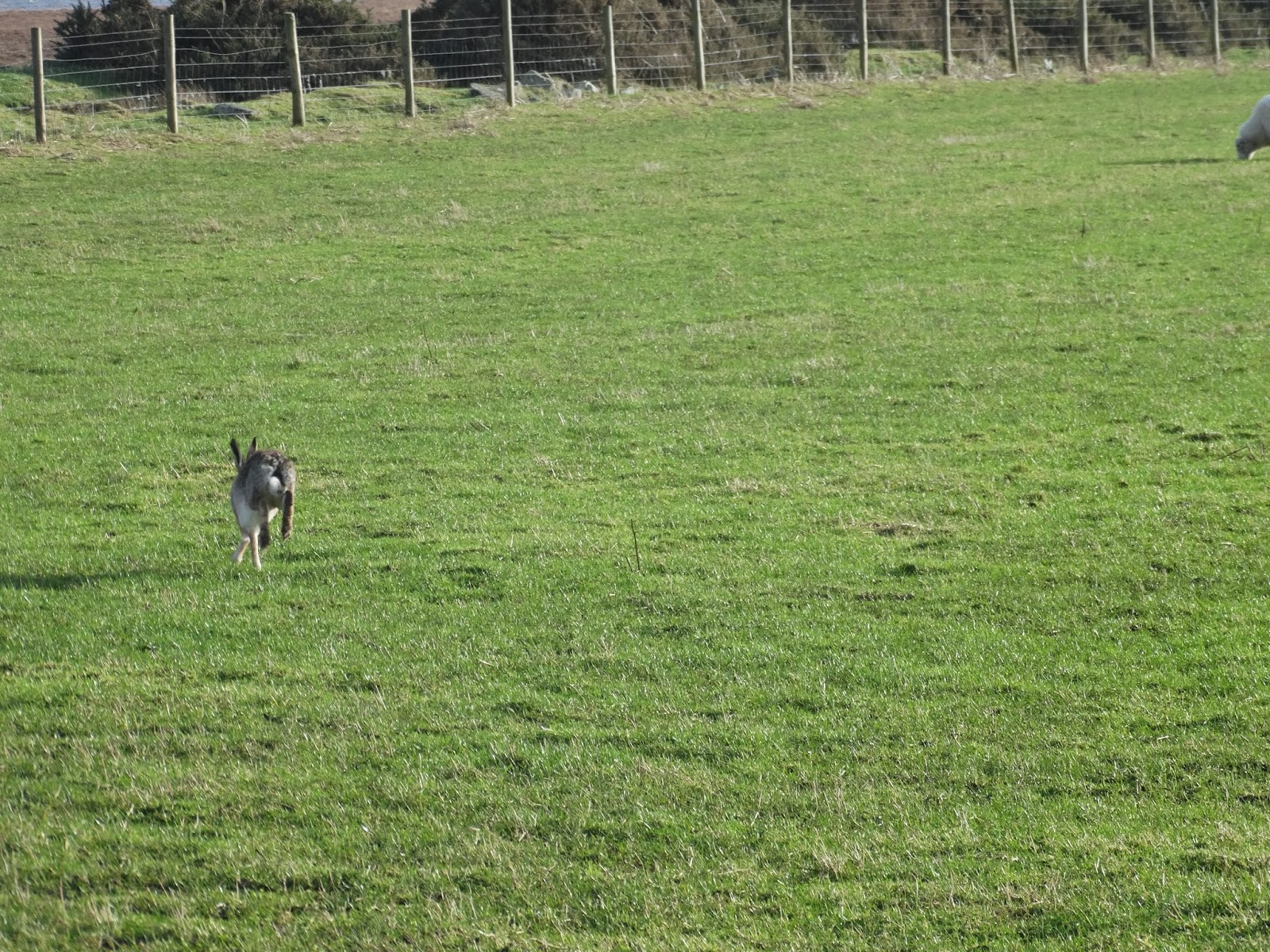 A hare on the side of the road. 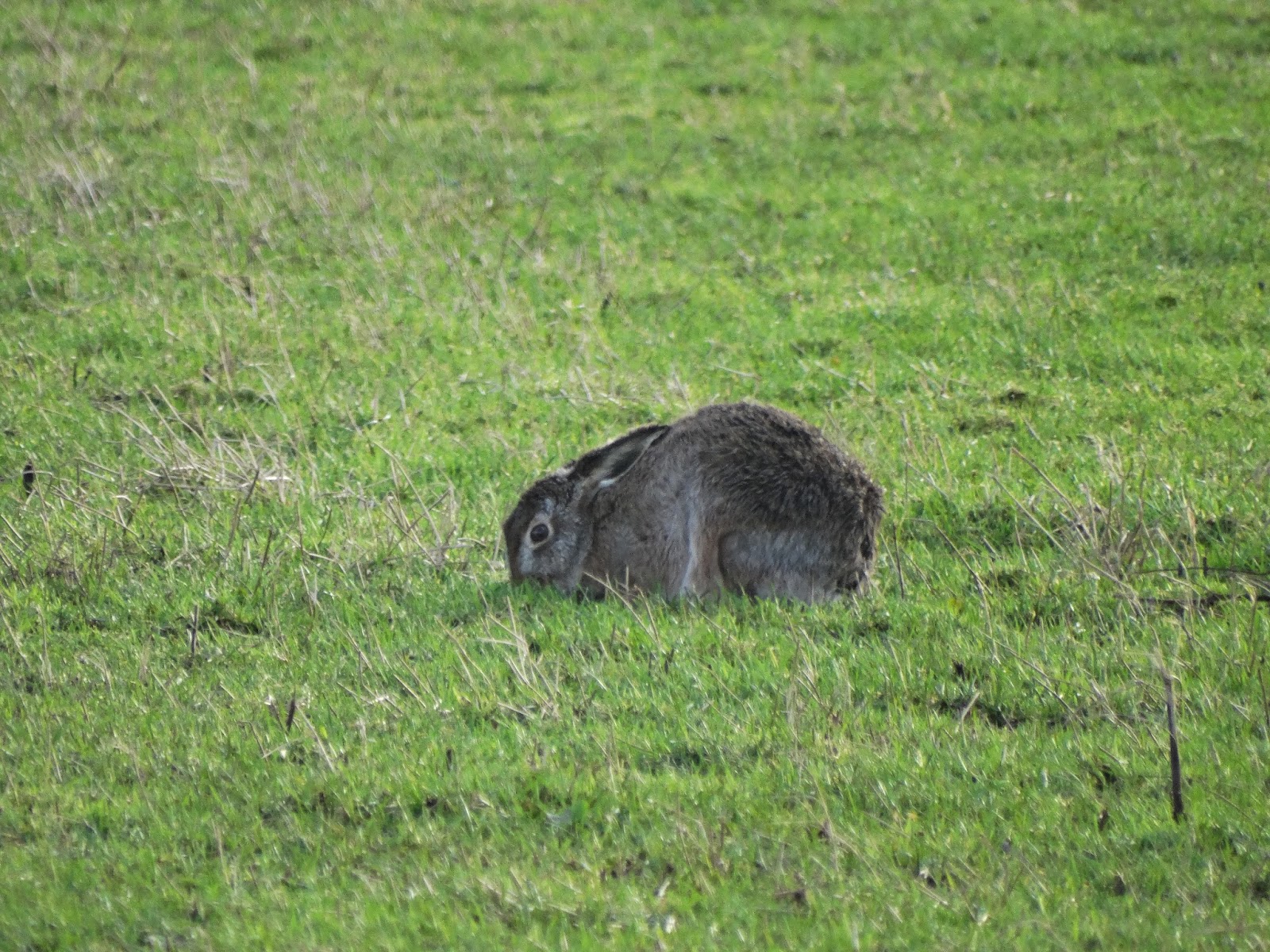 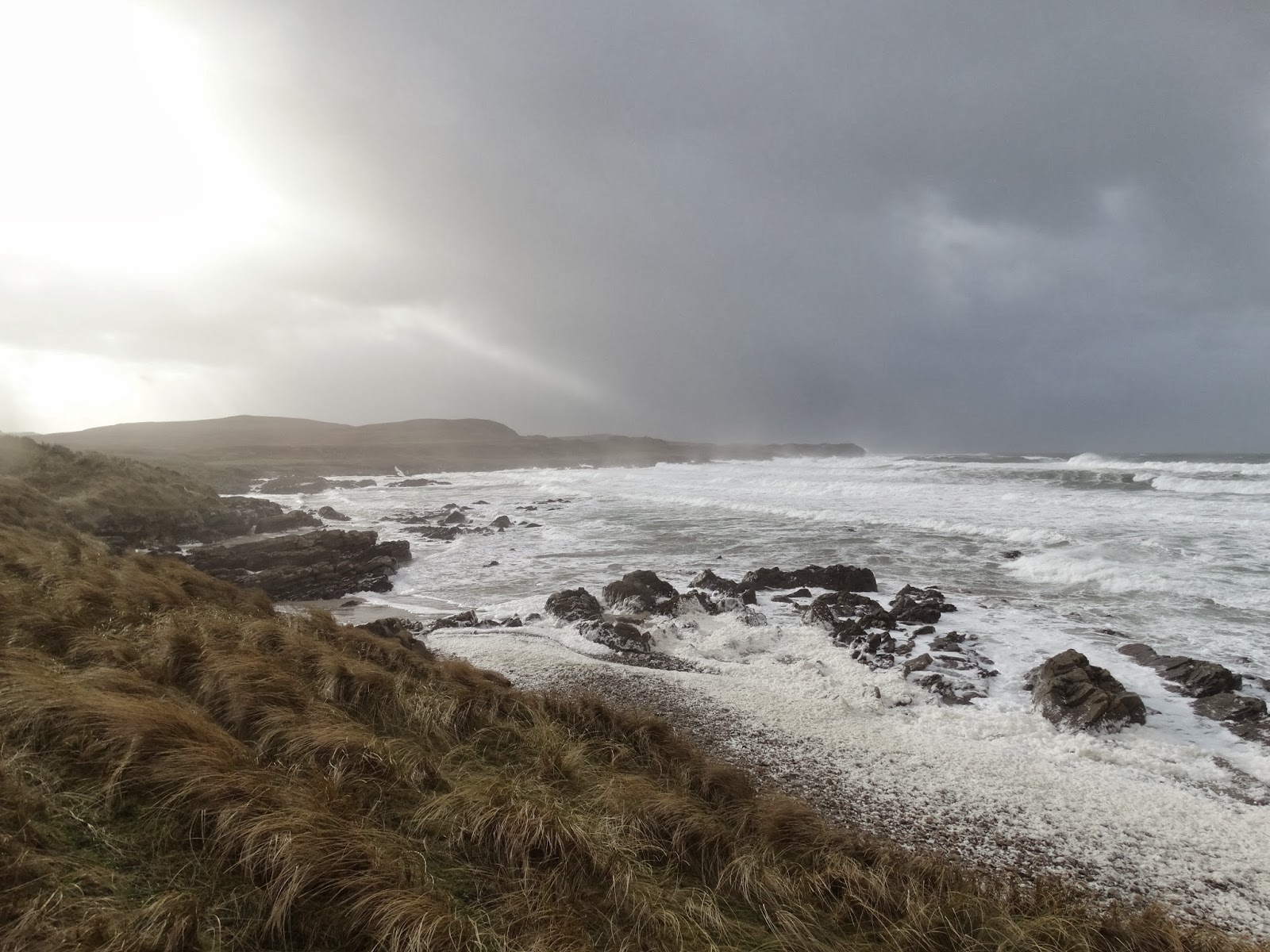 The foam at Saligo bay. 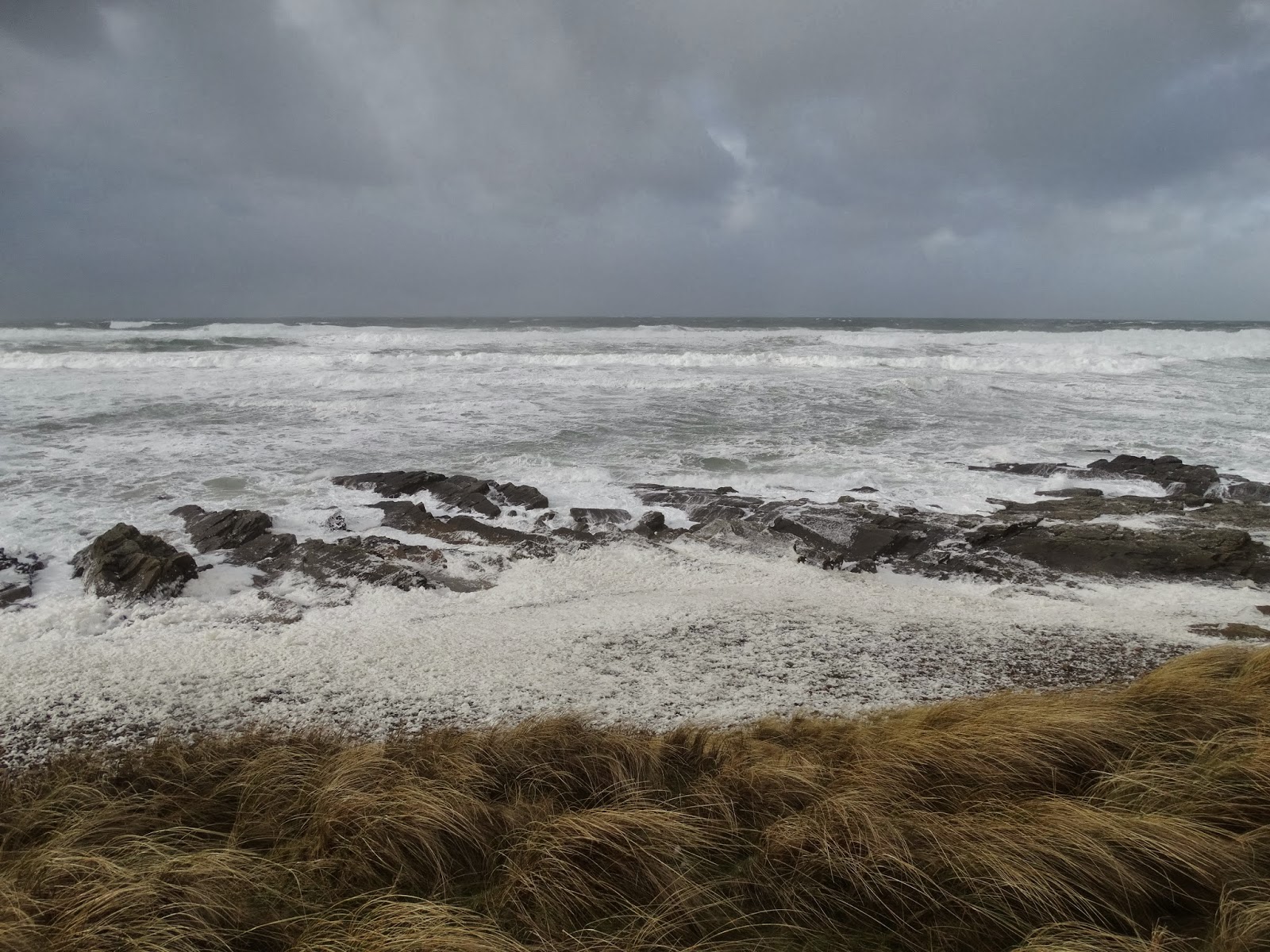 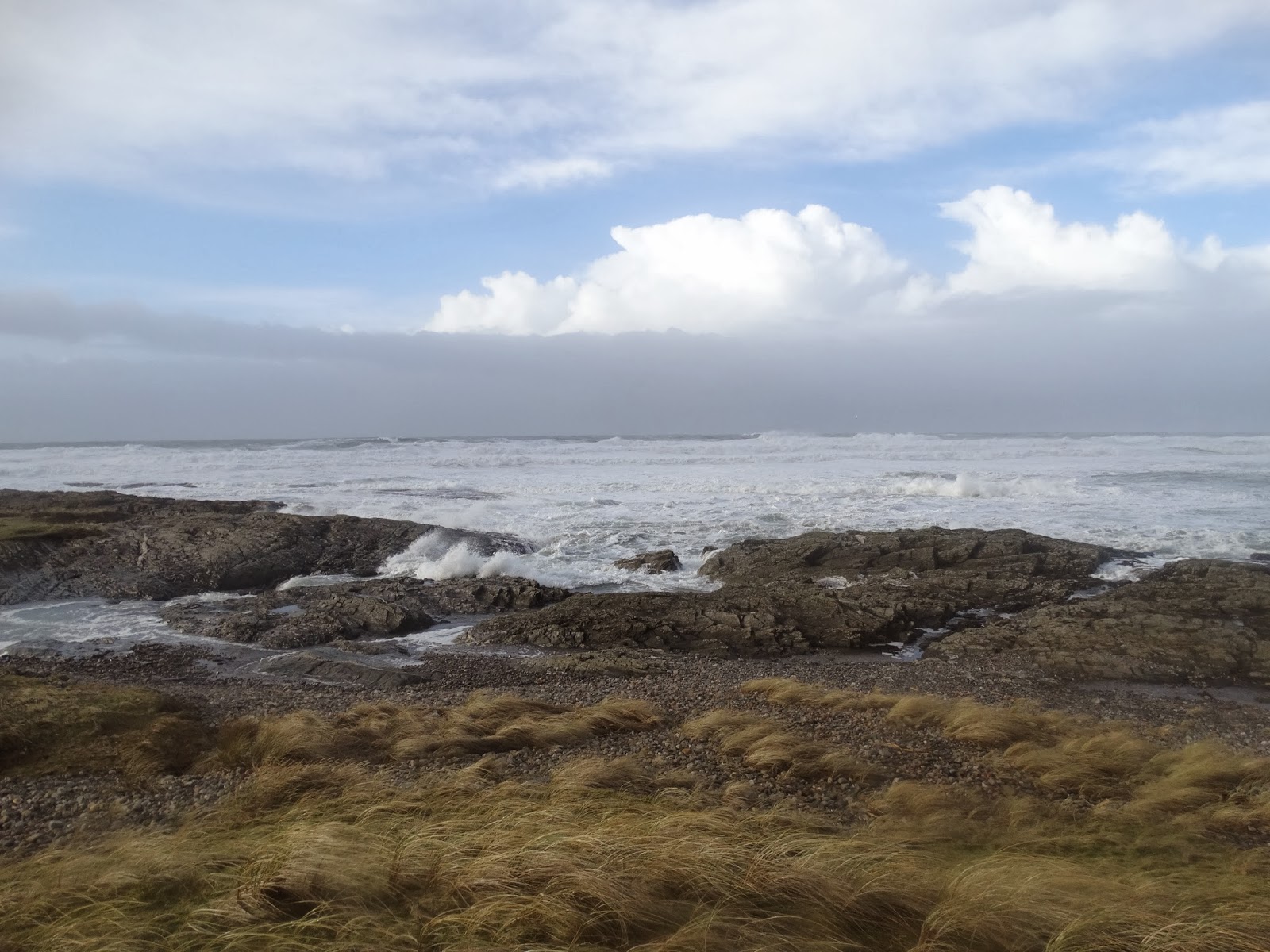 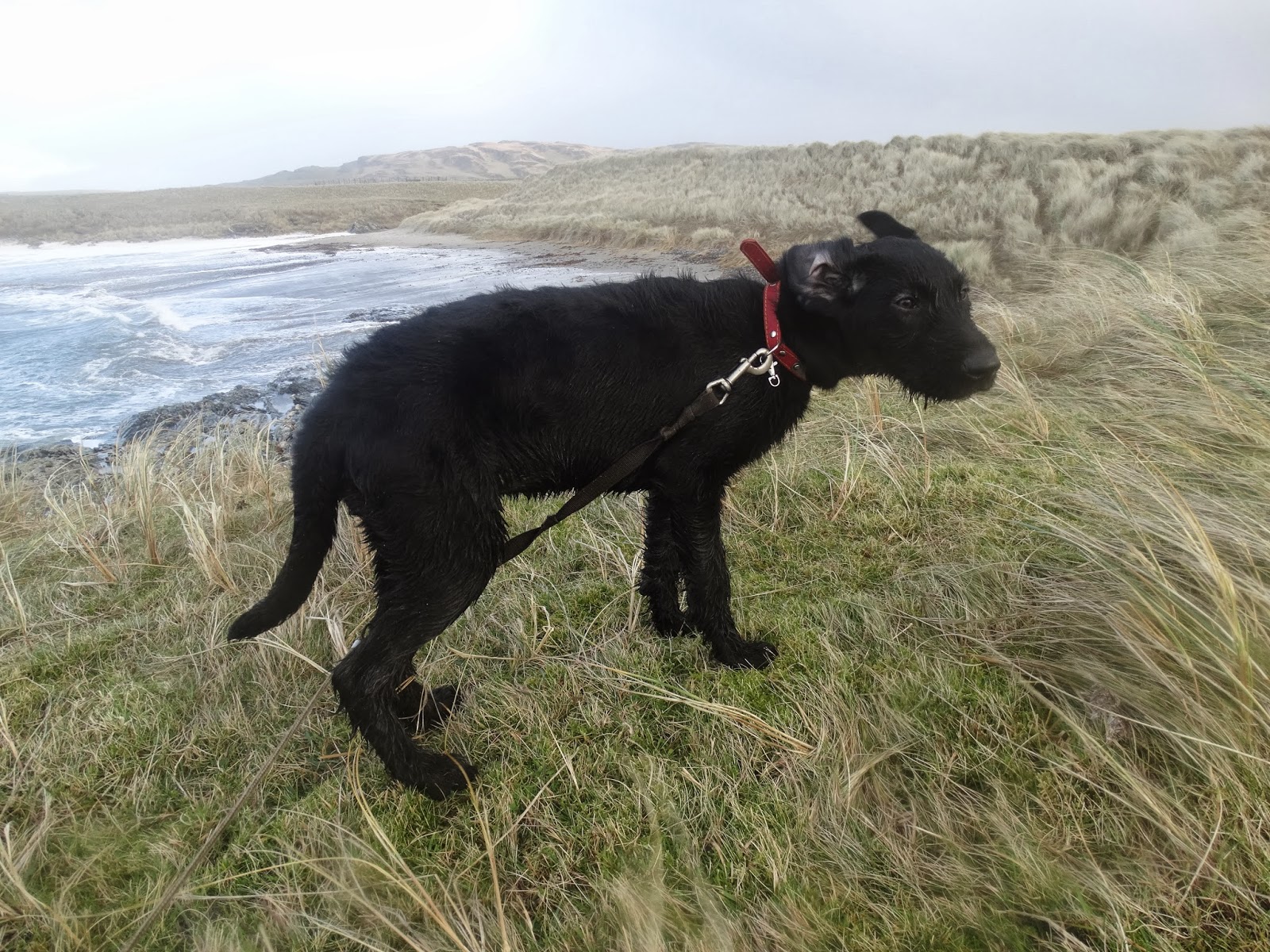 Cassie got a little wind swept.. 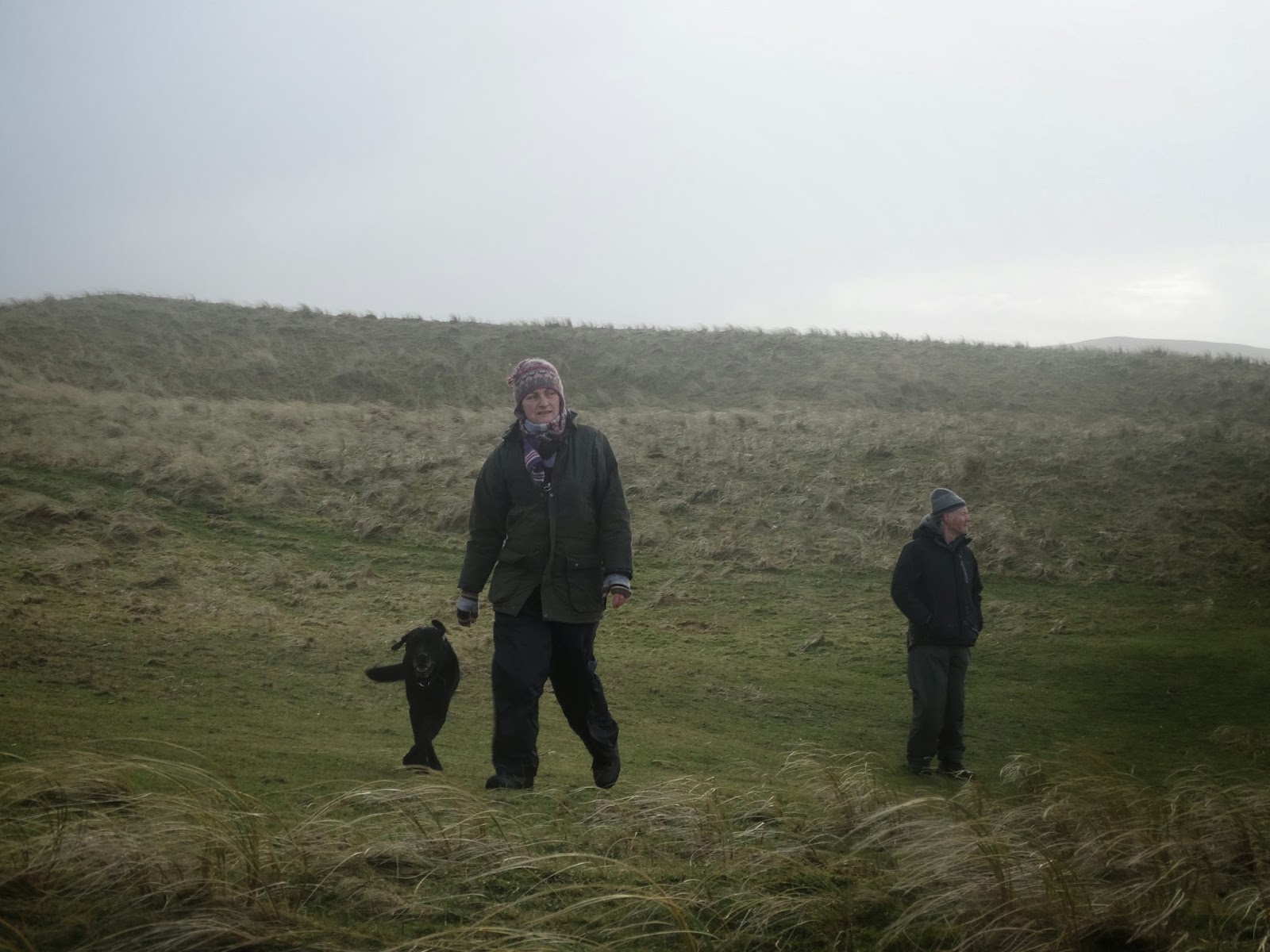 Isla was bounding on ahead, very happy and bouncy. Until she tripped over a tussock and fell headfirst into a bog... after that she stuck with Mum. Walking at a safer pace! 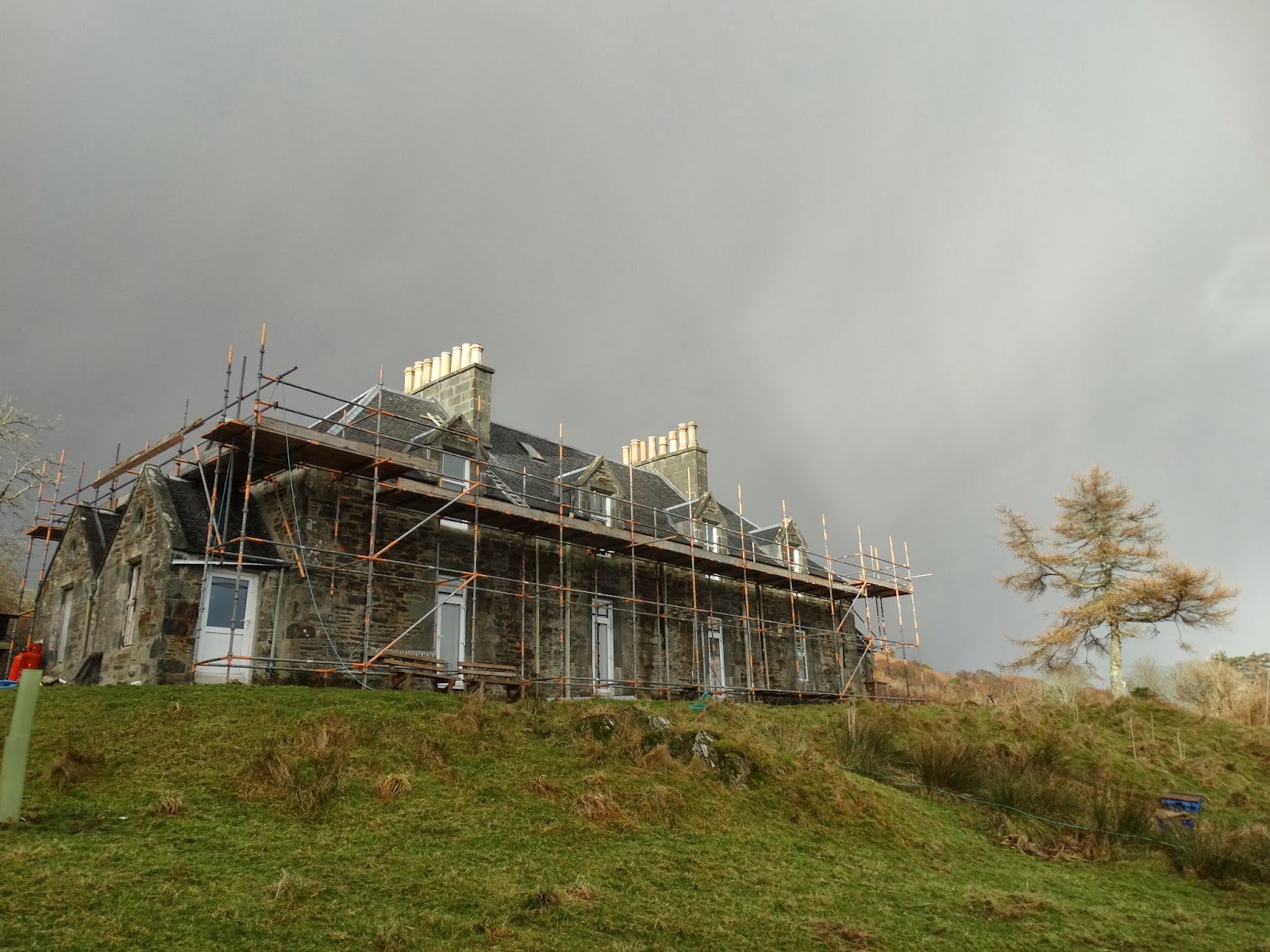 I leave you with a picture of the house taken over the weekend. It's looking a little bit better now, as is the weather. I hope that wherever you are, you are not being too badly battered by the wind, or drenched by the rain. Stay in the warm and think of us in the cold!