So I am back in Dorset now, due to choice, but quite a hard one. It's hard to leave behind such an involved project having been on Islay for 3 months, but as everyone keeps telling me, I am only 19, I have to do something with my life. Even so, going from working all day, most days n the house, and actually seeing progress to job hunting is a bit of a leap. Especially as job hunting seems to involve an awful lot of nothing. Anyway, Mary-Ann is emailing me with updates on the house so I will carry on with the blog even though I am now 580 miles away!

First though, my journey. It's always been my way to go for the cheapest option available, so on Thursday 3rd Octorber i found myself on the ferry with 20 hours of travelling ahead of me. I caught the 3.30pm ferry from Port Askaig, had dinner on board (soup £2.99, excellent deal!) then after a 25 minute wait at Kennacraig I caught the citylink bus to glasgow. There was some debate as to whether we would have to go a long way to bypass Rest and be Thankful due to a landslide, however, when we got to it, they seemed to have the situation well under control, despite the river that seemed to be flowing across the road! After a small hold up our lane was allowed to go ahead. It was pretty dark by that point, but the first part of the journey up until Lochgilphead had been very scenic, I didn't even have to turn on my ipod! The bus wasn't very busy at all, which I prefer by far and alot of people got off during the 15 minute break at Lochgilphead. We arrived at Glasgow only half an hour late, so I had a 45 minute wait at the Buchanan Bus station, that was fine though. (For reference, the toilets now cost 30p, not 20p, luckily the barrier had 10p credit, so I was able to use the 20ps that our friend Bob had given me anyway!) The bus from Glasgow left at 10.30pm, unfortunately, as I had a lot of bags and one was particularly heavy, I ended up getting on the bus near the end, and had to sit in a seat opposite a 20 something year old man who had 3 bottles of stella open in the pocket on the seat infront. It didn't really bother me that much... until he started writing me notes. Excellent. The first was pretty friendly, (Hi, my names Justin. Where are you going? Can I have your number? xxxx) I wrote back straight away (I'm going home to my boyfriend, so no. Sorry.) Perfectly polite, or so I thought. However, the next note insisted that he had not been trying to chat me up. I ignored it. The one after that however, told me he had lost his phone and he would like to look in my bag because he thought I had stolen it. I ignored that one too, flicking it onto the floor. By this time he was getting pretty angry, punching the seat in front of him etc. A while later he gave up and instead stretched out completely with his feet on the seat next to me. There was nothing to do but ignore him. Luckily 2 hours later at Carlisle, an older man got on and moved this guys legs and sat next to me. I was very grateful despite now being squashed into 1 seat with one bag and my violin case. Needless to say the next 6 hours were much less nerve wracking but exceptionally uncomfortable! The man was very nice too, he tried to buy me food in the service station. The wait at London was uneventful, unless you count the German lady who (sobbing) asked me for money as she was 'apparently' going to miss her flight, I refused, mainly becaue I didn't actually have any, ut also because I wasn't entirely sure I beleived her.. Anyway, in the end I arrived in Poole, Dorset at 12pm and was met by my Nan and her partner Nigel, who took me out for lunch.
Just a quick cost summary as I said I chose this option for the cheapness.
Ferry to Kennacraig: £6.30
Bus from Kennacraig to Glasgow: £6.00 (Amazing!!)
Glasgow to London: £21
London to Poole: £9
Total: £42.30 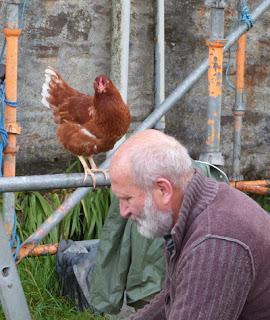 Bob and the chicken


So thats travel over with, onto the house.

First, 3 weeks ago we had 6 new arrivals! 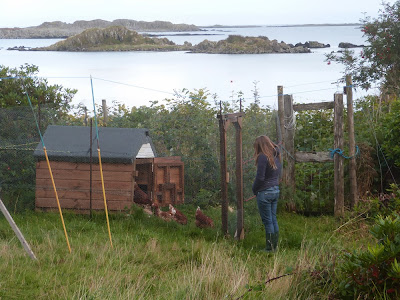 They do all have names, but as I'm the only one who knows who they all are, they are, for now, just chicken. No eggs as of yet.

We have also managed to buy some more slates. The lack of slates has been a constant hold up and a bit of a nightmare really. The slates go on to the roof in rows, gradually getting smaller. So the first row consists of 14+ inches to the hole, and then once these have gone you graduate to 13 1/2 inch to the hole etc. However, due to the fact that we are using west highland slate, they may be the same length, but they are all different thicknesses, widths and have strange lumps and abnormalities. This means that you have to find exactly the right slate for each gap. It's an absolute nightmare, and has, quite possibly driven Gary completely mad. We didn't realise how hard it was until Gary taught Nick how to do it so that he could carry on whilst Gary is away working on other projects. (I had a go at putting one on and bent the nail head-that's my roofing apprenticeship over.) Because each slate has to be specific it means that when we get low on a certain size 13, for example, as it was last week, it is pretty much impossible to find a slate that fits. Like doing a 10000 piece puzzle with only 7000 pieces. Impossible. So for the last couple of moths we have been on the look out for more slates. By a stroke of luck, Donald, our scaffolder, happened to mention that he had taken some off of one of his properties and consequently had 1000 slates going. Nick went down to see them and bought them for 50p a slate. (As a comparison, Spanish slate cost 73p a slate so a good deal.) However, as so many slates break during the dressing process, we are still short! There are some at the Bowmore firestation, but they are asking £2000, which is a bit steep... Peter Dewar said we should only offer a quarter of that, turned down, naturally, then we tried £1000, this was also refused. So, we have offered £1500, too much, but we're desperate! We're waiting for the verdict on that. Despite all this, the roof is actually coming on really well. All the dormers on the road side of the house have been properly leaded, involving Nick spending about 3 full days hitting them with a wooden beater. (He used Gary's to start with, but Mary-Ann and I bought him one of his own a Buildbase!) Then they all have to be painted with paternation oil. (my job whilst I was there) Screwing the lead down turned out to be the biggest problem as quite a few times they went into nothing, this meant that Nick had to go inside and build up the dormers from there using bricks scavenged by Bob from around the garden, I'm not quite sure why there are quite that many loose bricks around the garden, but never mind they have been very useful! 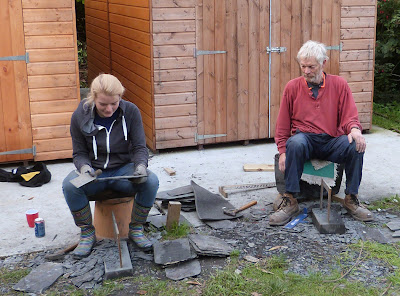 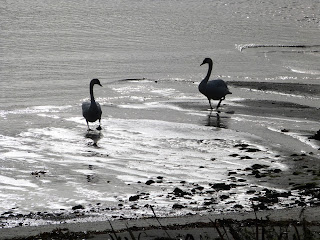 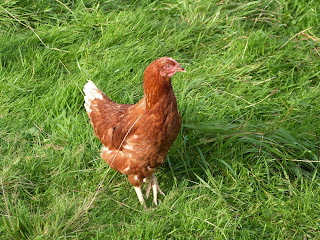 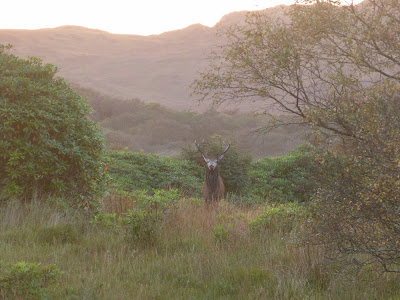 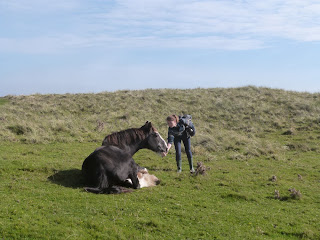 Meeting the horses at Saligo bay. 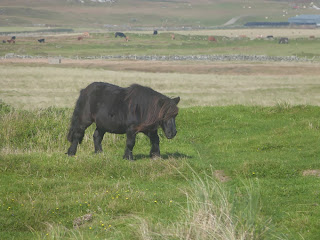 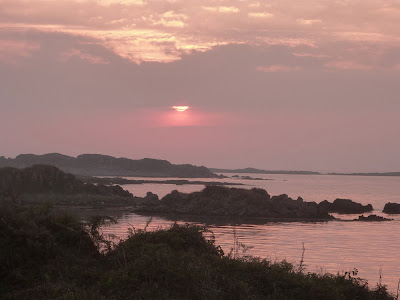 Sunrise over the bay.

One big development we have had is in the windows. We decided right at the beginning that neither us or Sandy and Tom wanted UPVC windows, even though they are so much easier to maintain, because they just don't suit the house. So we had as good as decided on wooden sash windows coated with a plastic coating, meaning they don't need maintaining. On Peter Dewar and Roland's advice we were looking at Blair or Andreson windows. However, Peter also mentioned BK joiners in Glasgow. When it came to it, these did seem the best option. They are not plastic coated, but do have 4 coats of paint and a 12 year guarantee before you have to paint them again. I think, Nick did actually want windows you have to paint, because, even though I doubt he'd admitit, but I'm pretty sure he actually really enjoys it. Although, as he pointed out, by the time they need painting, he'll be 75, so it's my job apparently... great. Mary-Ann and Nick took an impromptu trip to Glasgow, and met Peter Dewar there to see Alan Kelly at BK joiners. The windows are exactly what we are looking for, and cost wise are £19,500. Considering we need 23 windows and a door, thats pretty good and only slightly over the Anderson quote and much cheaper than Blair. As far as I can see they don't have a website, but this is them: BK Joinery The other bonus is that Alan Kelly is coming personally to the Island 3 times for various reasons-he came yesterday to measure up and the windows are being started today! 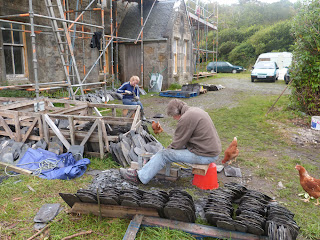 In general, almost all the work we're doing at the moment is slate fettling. Rick, Bob, Katie, Dan, Mary-Ann and Nick are all setting to it at the moment. We did put up a new shed last week, so we have some more storage space finally. Mary-Ann is coming to Dorset in late October, so we will be able actually bring back a lot of stuff and store it. Rick and Dan also started pointing inside the house in what will be Mary-Ann and Nick's living space.

Rick  and the chickens fettling. 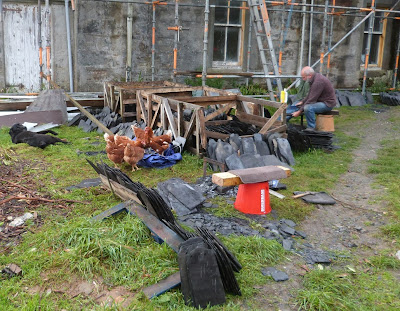